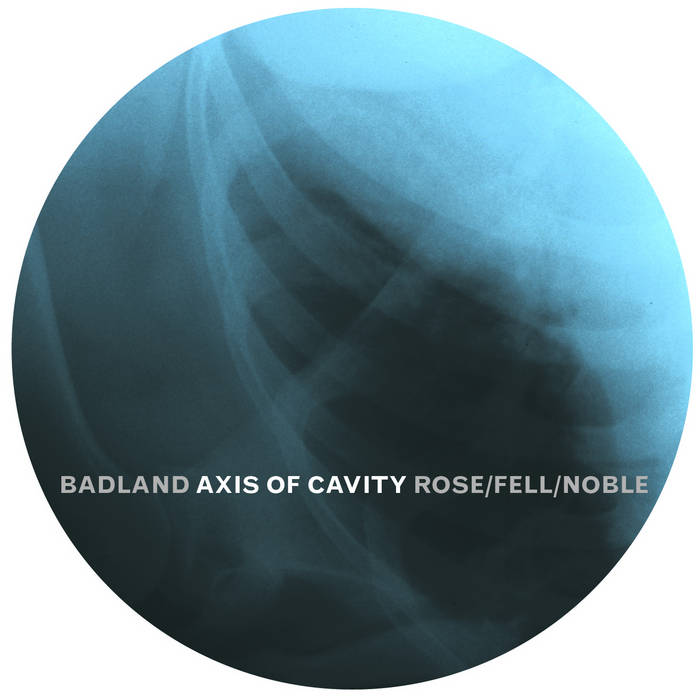 "The music fair blisters along, all three participants being on pretty fearsome form, and when you've heard it, it stays heard. At the start of the title track Noble lays out his stall: not all the trinkets are revealed at that point, but the intensity and skill with which he crafts the merchandise is immediately obvious. No doubt that he's among the most imaginative, powerful and responsive percussionists around. Groups like this are all about interaction, the on-going group dynamic. Badland keeps everything together but on the edge. Rose explores various ways of making the sax generate sound in addition to simply blowing steadily over a reed to agitate a column of air, and the many timbres, characters and colours the alto is capable of, and sometimes plays acrid straight-enough post-bop, too. The alto and Fell's powerful, kaleidoscopic bass whirl around, cannon off and fruitfully liaise with each other and Noble's drums."
Barry Witherden JAZZ REVIEW

"Altoist Rose is the dominant voice. He has some of the English reserve which John Butcher specialises in, but he hasn't totally eliminated the melodic fervour and gospel excess of the black American free players. However, what he plays is no forced compromise: he has his own, rather dignified, sound. The music is linear and fluid, with FelI and Noble suggesting sonics and textures which provide alternative environnments for Rose's central voice. Some of Noble's clattering inventions here and Fell's spuming 'walking bass' are priceless. Extraordinary how clean and sober jazz can become and still remain, essentially, jazz. Special. A:1"
Ben Watson HI FI NEWS

"To these ears, Badland deftly combine their individuals respect for traditional jazz and free forms with personal, sometimes idiosyncratic (read: 'style') technique. Rose intermittently recalls Ayler, Coltrane, Dolphy, and Coleman - but retains an attack and the ability to sustain an extended technique all his own. Simon Fell's double bass-work is beyond reproach - often developing into such a clamorous gallop that it's a wonder the other 2/3rds can keep pace, and when he picks up a bow... watch out!. Steve Noble is a delight, leavening his explosive outthrusts and drumhead massage with broken rudiments and abstractions of traditional jazz foundation-laying. These compositions - structured improvisations? - swing 360 degrees and touchdown on many points on that circumference. A trip worth taking twice."
THE UNHEARD MUSIC

"These British improvisers move forward with the intentions, audacity, and forcefulness of a high-powered rock trio, as they demonstrate a proclivity to mimic each other's movements while exploring various angles amid blustery choruses and gushing crescendos. However, what sets this outing apart from many of the hard-edged, freeform blowing sessions that modernists are accustomed to resides within the band's subliminal rhythmic structures. With this effort, alto saxophonist Simon Rose renders plaintive cries and dirge-like motifs, while bassist Simon Fell and drummer Steve Noble provide a reverberating, at times oscillating undercurrent for the saxophonist's macrobiotic tone poems and abstract discourses. Needless to say, this band is having a blast - and it shows. They convey a profusion of thought-provoking sentiments to coincide with a brooding methodology that signifies an air of elusiveness in concert with a distinct sense of the dynamic. Overall, this release has quite a bit to offer, especially for those who think they've heard it all. ****"
Glenn Astarita ALL MUSIC GUIDE

"Axis Of Cavity is a subtler but if anything nastier piece of work than Improvabilly: an act of evisceration rather than bludgeoning. The excellent recording quality is also a plus, rendering the sonic violence with a clarity that accentuates the music's perverse fascination (it makes me think of the ravishingly gorgeous and gruesome 19th-century medical photographs that adorn Naked City's Grand Guignol). What's most impressive on the album, perhaps, is how much musical range is packed into each track, and how different and eventful they all seem: some contain quiet passages examining a particular sonic texture at length (for instance, the first half of The Scapula Angles, where Rose's saxophone flutters over the oozing drums and bass); some are sprightly, rapidfire free-jazz (Spinous Process); there's even one track (Bow, Stick And Reed) which if it were unkinked a bit further would sound positively mainstream: Fell's work on it is more Dave Holland than Barry Guy, and Rose is downright bluesy. A similar process of encompassing musical extremes is also audible in miniature within each track: this is most obvious on the CD's one extended track, Surface For Talice, which ranges from quiet insect-music improv to an exhilarating climax on which Rose plays with acetylene-torch heat. (Not a track for those with ears sensitive to high pitches, let me note.) Of these two discs, Axis of Cavity is definitely the more challenging - and (as a result) it's also the most rewarding."
Nate Dorward CODA

to read more reviews of this recording, click here: www.brucesfingers.co.uk/catalogue/bf40reviews.htm