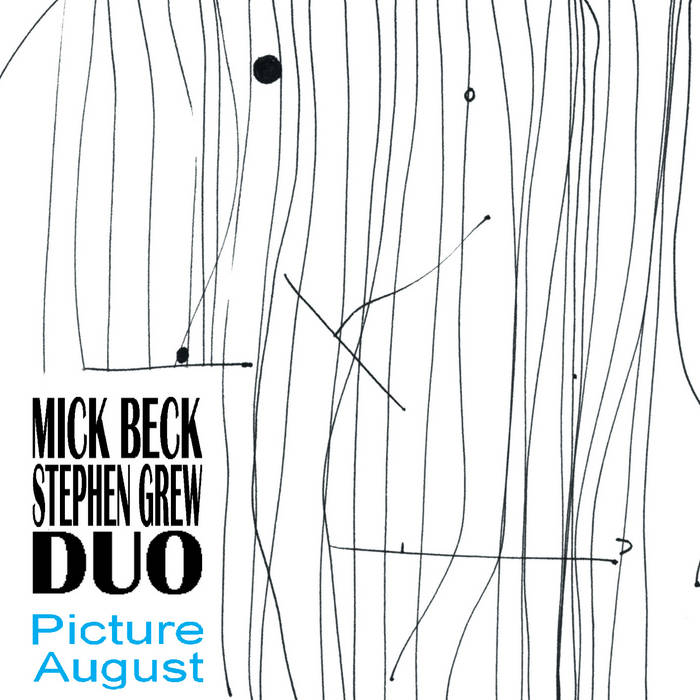 Ulrich Jonas Both musicians are not famous, even in new jazz circles. They do not live in London. They are worth a listen.

"Beck plays tenor with conviction that can border on lawlessness. The music overall has a quality of formal order, enhanced by the chapel acoustics of the recording space, yet continually under threat from the duo's wry humour and teeming musical ideas." Julian Cowley THE WIRE

"This partnership is less than two years old, but the compatibility of their respective approaches is on broad display during the conversations collected here. All of the pieces were recorded in an expansive chapel space and the commodious dimensions of the venue leave their acoustic stamp on the sound of both players. Beck's surly tenor is imbued with dilated echo due to the surroundings while Grew's querulous keyboard antics possess a similarly angular spaciousness. Over the course of their conference both men wrest a myriad of emotions from their instruments. This disc is an enjoyable meeting between these two accomplished improvisers." CADENCE

"Highly focused imaginative improvisation.... Beck is at his best when he leaves behind his Aylerisms and concentrates on building melodic lines, underpinned by Grew's hymn-like chordal repetitions - his gradual move towards atonality somewhat reminiscent of Charles Ives. Indeed, it is the lyrical content of their improvising, best suiting the acoustic of the chapel where it was recorded, that is most successful." Bruce Coates RUBBERNECK

"A wealth of moods and emotions are explored by the freewheeling duo, the only limitations being the imaginations of the performers. The disjointed quality of some of the pieces, such as the invigorating Is There a Race Against Time?, is actually a plus, as the disorienting rhythms knock the listener off guard. Beck's bassoon playing adds variety, too, as does his work on recorders on, for example, the eclectic Think and Whistle. In the liner notes, Beck refers to the mix of "interrogative humor with musicality." The humor is often subtle, while the level of musicality remains at a high keel. On the representative Little Drummer Boy, Stephen Grew darts in and out of time and rhythm, while Beck jabs and pokes notes sporadically, eventually falling into an intense groove. The pianist incorporates repetitive elements, with the saxophonist swirling notes as though he were locked inside a twirling drum. Lean by nature of the setting and the instrumentation, the duo favors abrupt endings and dramatic changes in volume and tempo, something that is more easily accomplished with a small number of performers." Steven Lowey ALL MUSIC GUIDE

"On his duo session, reedist Mick Beck, best-known as a ferocious tenor saxophonist who has worked with the likes of bassist Simon H. Fell and guitarist Derek Bailey, ups the ante and doubles his reeds by playing bassoon on two numbers. Putting the instrument to uses that its orchestral makers probably never imagined, Beck produces sounds that range from the reverberations of a bull moose's cry to the kazoo-like squeaks of shredding comb-and-tissue paper. Proving he can play those Tubby-the-tuba low notes, the saxophonist mostly lets the instrument's natural echo illuminate the pieces. Meanwhile Grew, who has developed own language of scales and patterns, created music for a dance company and played with saxophonists as different as Lol Coxhill and Andy Sheppard, pretty much goes his own way. Bringing a celeste-like sound to some of his higher keyboard excursions, his steady rolling accompaniment is most prominent on Upflucht. Turbulently squeezing out distorted burrs and smeary spit, Beck attacks the tune with ascending reed trills. The saxophonist's open mouthpiece key pops on A Good Ballad (sic) suggest how an inebriate would sound playing - or spraying - this slack tempo piece. Meanwhile, Grew accompanies him with odd note clusters. Earlier, on Molten Metal, the saxman's collection of growling toots actually gets the pianist to not only go two-fisted on him, but figuratively dig his right hand into the keyboard to create his own trills and some harp-like glissandos. A memorable showing all round." Ken Waxman JAZZ WEEKLY

"These are eight tracks of pure improvisations and interaction between saxophone and piano; opening with Upflucht this duo soon shows how they will work through the recording. Here both play the role of creating some background when the other musician is doing some lines. Beck does some middle range lines while Grew adds some notes and chords with his piano, and then Grew creates some chord progressions over which Beck delivers almost schizophrenic moments. There is a lot of interaction in rhythm here where both instruments deliver similar rhythmic structures creating the idea of a dual instrument. There are more jazzy lines delivered by Beck but most of the time the improvisation works through taking the instrument to the extreme or adding dissonances and contrasts. This is almost one hour of pure spontaneous music without boundaries." MUSIC EXTREME