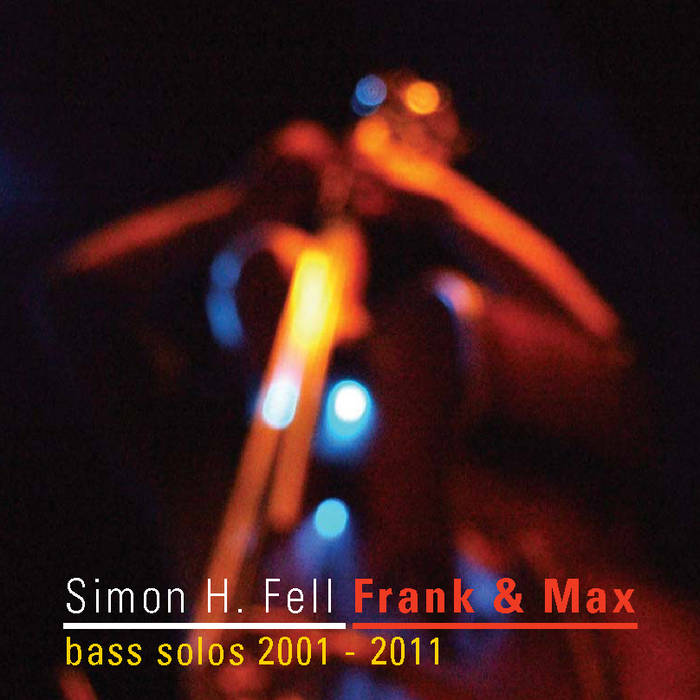 “Each tune covers such a wide and strong set of ideas with such clarity that it appears not as a painting might, a fixed space of articulation, but as a sculpture that reveals hundreds of aspects as you circle it. In some ways it’s a love letter not only to his friends and forebears but also to the instrument. Fell highlights the personal, the physical, the serene and the imaginative in a way all solo documents of this kind should be encouraged to do.” Ben Hall THE WIRE

“The eight recordings on Frank & Max are initially striking for the considerable variation in the pieces, and that they all sound immediate and current, not like they were recorded over the course of a decade. Fell uses all manner of techniques here, from his gorgeous chord style, his disciplined arco playing, a high-wire pizzicato at the top of the neck, and more. All but one of these tunes are improvisations. The lone exception is Bill Evans' Turn Out The Stars; this nearly nine-minute reading of Evans' classic is so expressive and filled with emotion, it cannot help but stand out here. Other pieces that set themselves apart are For Barre Phillips, with its flashy pizzicato runs, deftly plucked chords, and lightning-quick shifts in timbral concentration, and closer For Charles Mingus, a noisy, droning, yet emotively warm piece played mostly arco. That said, everything here is played with great imagination and discipline, and is also recorded exceptionally well - despite the fact that it was cut in two different locations. If solo bass records are something you appreciate, this ranks among the very best, right up there with albums by Barre Phillips himself, and Dave Holland.” Thom Jurek ALL MUSIC GUIDE

“A welcome return to the public arena by Simon H. Fell, the gifted English composer, improviser, musician and all-round good guy who we interviewed in an early issue of TSP magazine. Frank & Max is subtitled Bass Solos 2001-2011, and it showcases Fell rattling out some impressive improvisations on his chosen instrument, the upright double bass. Each piece is dedicated to people who have been important to Fell (such as his first bass teacher) but also to notable bass players from the history of jazz and improv, such as Barry Guy, Barre Phillips, Harry Miller, and my personal favourite Charles Mingus, the great enigma of American jazz who I’ve been listening to and collecting since 1978 and yet continue to find surprises in his catalogue. Indeed if you ever care to make the effort to delve into Fell’s back catalogue and hear some of his large-scale and complex big band compositions, you’d see why in my mind I liken Fell to Mingus. The recordings for this release were made by Fell and his long-time friend collaborator, the English improviser Graham Halliwell, and they certainly knew where to stick their microphones: the album has a room-vibrating presence that’ll shake off your lethargic outer layer as a snake sloughs its skin. Once denuded, you’ll be back in touch with your true inner core and can accomplish great things.” Ed Pinsent THE SOUND PROJECTOR

“In 1991, double bassist Simon H. Fell released a solo bass cassette on his Bruce’s Fingers label, entitled Max. For 20 years it stood in splendid isolation as his only solo recording. Now, he’s followed it up with Frank & Max which, despite what the title might imply, does not include any of the material on Max. Instead, he offers eight bass solos recorded between 2001 and 2011. On any album of solo bass, two vital factors are the sound of the instrument itself and the quality of the recording. Here both factors are absolutely right. So we hear the full detail of every note as if we were standing right next to the bass, allowing Fell’s playing to be fully appreciated. Across the album, Fell employs a wide range of techniques that generate as wide a range of sounds. However, unlike solo bass albums by some others, this never becomes a mere technical exercise; Fell incorporates the sounds produced into music that is both varied and satisfying. The six-minute For Jo Fell & Patrick Charton is a particular highlight, a virtuoso display of Fell’s nimble-fingered technique and stamina as his fingers fly all over the fingerboard and strings, producing a cascade of rich, resonant music that listeners will feel as much as hear. In complete contrast, but just as impressive, is For Harry Miller, on which Fell uses his bow far more. He summons up long booming arco notes from the depths of his instrument, interspersing them with higher, lighter arco notes and plucked runs as contrast, in a pyrotechnic display of the versatility of the bass. Of the only cover on Frank & Max, Fell comments that “if you improvise upon a five-string bass with a low B string you will eventually end up playing Bill Evans’ Turn Out the Stars… look at the score.” He demonstrates the point by producing a fluid version of the piece, which flows smoothly out of the instrument as naturally as breathing — like the album, a delight from start to finish. Albums of solo bass are rare, good ones rarer, with little agreement among fans of the genre about the best ones — but Fell’s list of dedicatees is a good place to start, with Journal Violone by Barre Phillips, Symmetries by Barry Guy and Volume by John Edwards, as well as Peter Kowald’s Was Da Ist. One thing is certain: with the release of Frank & Max, Fell has earned the right to join such exalted company.” John Eyles DUSTED

“Like any record of unaccompanied double bass music, Frank & Max is for specialized tastes, but if you’re already ready to go there, you’ll probably want to stay with this one a while. Fell is equally persuasive plucking a quietly buzzing abstraction from a Bill Evans tune, playing arco like a bull precisely goring an annoying runner, or wrenching complex, explosive tone clusters from a custom-built 5-stringed instrument because he has the right balance of chops, poise, and fearlessness to get the job done.” Bill Meyer TOKAFI

“What's sometimes lost in discussion of free music and players of "extended technique" is the mastery of making the instrument sing – which Fell surely does, especially on his wonderful version of Bill Evans' Turn Out The Stars here, full of introspection and delicacy. But if the instrument can sing, then it can yell, too, and do all manner of unruly, damaged things. The closing For Charles Mingus is just that, moans and thwacks emerging from upper-register bowing and what sounds like a variety of rugged mutes and mean-ass preparations. This is the behemoth, pissed-off Mingus, but not without his sweaty sense of humor. A truly gorgeous solo bass recording.” Clifford Allen PARIS TRANSATLANTIC

“The real standout of the (recent Bo’weavil) batch is Frank & Max. These eight improvisations are studies teeming with musical invention. There is an inspired musicality to how Fell threads his ideas together, and each piece stands as a fully realized statement. He also performs Bill Evans’ Turn Out The Stars, delivering a free interpretation that hums and buzzes with spontaneous lyrical refinement. Highlight abound, but the nuanced arco on For John Edwards, the darkly resonant For Harry Miller, and the oscillating timbres of For Charles Mingus are all worth mention. The recording quality is stellar throughout, picking up every detail.” Michael Rosenstein SIGNAL TO NOISE