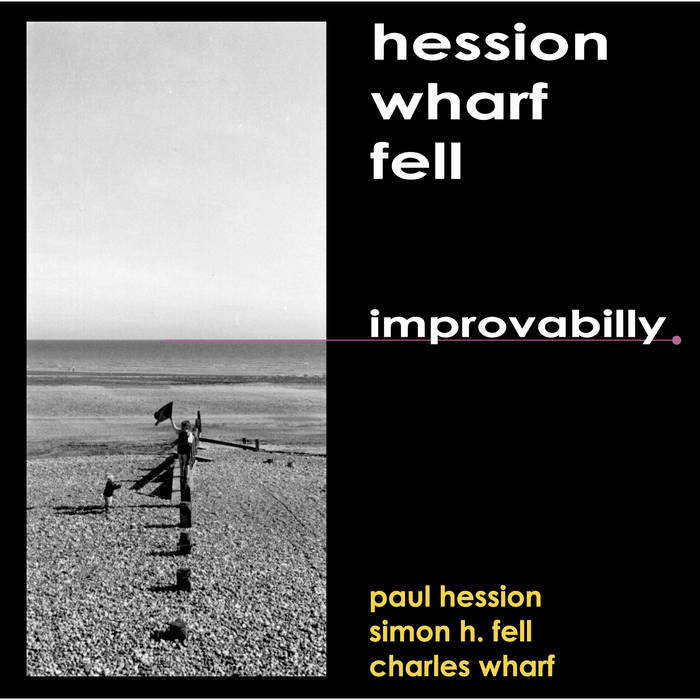 A welcome return for one of the longest-standing BF trios, playing the manic free jazz which has recently been somewhat absent from our catalogue. Their first recording for 10 years; is it just like the old days.....?

"This is a set that stands as tall as anything in the formidable Bruce's Fingers catalogue. The trio speaks in a free-form language which has been part of jazz for long enough to have acquired a kind of repertoire status, and it no longer sounds especially 'modern' or disturbing - unless you're waiting for a lulling chord sequence to arrive. What gives it particularity are the superlative skills of the players. Hession has built his Elvin Jones influence into a kind of never-ending drum solo that is a masterclass in dynamics, propulsion and sound- painting. Wharf has a slippery delivery that he modifies across his three horns: pinchy and needling on soprano, blustery on tenor, moochingly songful on bass clarinet. Fell thinks at lightning speed: he changes tack, switches from fingers to bow, and plays for the others or himself with an alertness that won't hear of any slackness in the music. He's the best kind of virtuoso. Most free-music discs have occasional dead spots. This one grips and won't let go."
Richard Cook BBC MUSIC MAGAZINE

"For those unfamiliar with Fell, he is one of England's and perhaps the world's most creative bassists and composers. Fell, like so many other talented and creative improvisers, continues to have a low profile, which is unfortunate as his technical and compositional abilities are both compelling and unique. That being said, these three releases (Axis Of Cavity, Thirteen Rectangles & Improvabilly) demonstrate that he is not afraid of taking significant risks in order to make absorbing music that pushes the envelope far into the 21st century. Improvabilly is a rollicking, sometimes chaotic journey full of stirring bass, rumbling drums and spirited exchanges. In order to expand his soundscape, reedist Charles Wharf employs a variety of instruments, including tenor saxophone, bass clarinet, or soprano saxophone. Hession's approach concentrates on intensity, power and propulsive, steamtrain-like movement, as opposed to colors. The power comes directly from his snare, toms, and ride cymbal patterns, like a whirlwind around his kit. Even during the quieter moments, Hession is a quick-fire sharp-shooter. Fell is a brilliant technician whose percussive arco technique is impressively displayed here. This is a frequently chaotic, no-holds-barred collaboration. The disc's opener, Between the Clock and The Bed, has the trio going full throttle with Wharf's intense barrage of robust tenorisms, Fell's arco gymnastics and Hession's salvo of thundering drums and cymbals. The Interior Of Sight is a clattering, diffusive piece where Wharf's twisting, sinewy soprano darts in and around Hession's swirling drum colors and ultimately, Fell's arco splendor. The final track, The Angel of Hearth and Home, begins in a more abstract manner, but the improvisations are knotty and typically in your face, despite the lower tone focus. Over its eighteen minutes, the intensity does not subside as the trio tests one's tolerance level. This is a profoundly thrilling ride, full of animated and fierce exchanges by brilliant creative musicians at the top of their game. Perhaps, like the way early Albert Ayler or Peter Brötzmann's trios can make one feel, this is the best of what fiery improvised music can offer; naked and dynamic demonstrations of pure passion and emotional intensity. Surely, this is a powerful ride that should be taken every once in awhile. Fasten your seat belts for this one, folks."
Jay Collins CADENCE

"Described as by the musicians involved as "manic free jazz," Improvabilly is the first recording in 10 years by the power trio of Charles Wharf on woodwinds, bassist Simon H. Fell and drummer Paul Hession. Yet while it doesn't detract from the pile-driver authority of the session - or the trio members - by also asking: "is it just like the old days?" the response is what they probably wouldn't expect. Yes, not only does the sound compare favorably to other Fell-Hession trios like the one with saxophonist Alan Wilkinson, it also suggests the gut-wrenching eruptions of even earlier free jazz bands such as those led by saxophonists Albert Ayler, Frank Wright and Peter Brötzmann and the heyday of the new thing. Bringing that same heft to his solos on soprano and tenor saxophones and bass clarinet Wharf, whose association with Fell goes back to 1981, unquestionably makes his presence felt. But the bassist and drummer, who together and alone have faced off with such frenzied improvisers as Brötzmann, George Haslam and Paul Dunmall aren't fazed in the least. The only folks who may be shocked, though, are those who know Fell merely from his large compositional works or minimalist combos such as VHF. His playing and that of the others is as rip snorting here as it is restrained elsewhere. A strong example of this occurs on Self Portrait With Burning Cigarette. Here Wharf's Aylerian honks and R&B style intensity vibrato are met by speed-of-light bowed bass reflections with its share of yelps and a deep ostinato midway between Jimmy Garrison and Ronnie Boykins. Hession's steady rumble and roll sometimes takes in Sunny Murray-like outright banging. Ultimately the whole confection of raw excitement dissipates in a final nephritic squeak from the tenor saxophonist. Not that rawness is the end-all and be-all for the three. The Interior Of Sight, for instance, begins with about one minute of restrained bare hands drum skin and cymbal undulation, succeeded by the definitely non-Western cast of a snake charmer's plaint from Wharf's soprano sax. As the saxist moves into penny whistle territory, Hession introduces double stick manipulations and sounds as if he's playing a conga or doumbek. Fell's quick shift from shrieking high pitches to resonant lower tones keeps the rhythm steady leading to a mini duet with Wharf irregular vibrato matching his percussive rumbling. Then there's the more than 18 minute The Angel Of Hearth And Home which shows off Wharf's sideslipping bass clarinet approach. Quickly accelerating from proper BritImprov mode built around tiny gestures, he's soon sounding out a full-fledged theme from mid-range enlivened with the occasional chirp for emphasis. The rhythm section's shifting accents also give way to an approximation of walking bass from Fell, who braces the beat with guitar-like strokes. Bass clarinet twittering becomes more aviary as the tempo accelerates as Hession's press rolls and Fell's unvarying basso pattern encourage Wharf's dissonant playing to such an extent that between his tiptop high and basement low notes it sounds as if two horns are playing at once. Eventually you have a mental picture of him that resembles those photos of John Coltrane bending from the waist and blowing, as Wharf squeezes constricted notes from his solar plexus and you wonder when and where it will all end. Where it does is when he shifts back to mid range tones so you'll recognize the bass clarinet, before climaxing in repeated mystical squeals and painful sounding smears. "Is it just like the old days?" Well, perhaps with a decade of varied musicianship internalized by all three, 'it' is actually better. Hession Wharf and Fell prove that there's still plenty of effective forceful music that can be produced in a free jazz setting sounding a horn, beating a drum and plucking a bass."
Ken Waxman JAZZ WEEKLY

"Simon H. Fell has his fingers in so many different projects these days - from his large-ensemble compositions to the super-silent IST to the hard-charging free combos such as the one presented here - yet he always seems to operate at a level of very high quality. With much of his recent activity being devoted to more compositional endeavors, it's hard not to hear this raging tour de force as something like letting off steam. Returning to these kinds of activities must be like coming home to roost for Fell, and the relative familiarity of this kind of context delivers its own comfy pleasures to the listener too. These guys hit the ground running on the opening Between the Clock and the Bed, hitting it with confidence like only groups this long-standing can. The general feel is muscular and action-packed, hearkening back to the sonic assaults of early FMP sessions. Even when Wharf is feeling more contemplative - generally on bass clarinet (check the closing Angel of Hearth and Home) rather than tenor or soprano - there's tension and energy to spare. But for all the heavyweight moves, this trio is capable of admirable subtlety too - hear it in the way Wharf sings in an almost fragile manner during the densest moments (his soprano turn on The Interior of Sight), Fell's attention to detail in his sublime arco work (especially ghostly on Self Portrait with Burning Cigarette and intensely hot on the long final track), or in Hession's unexpected moves (where, instead of rolling thunder, he clacks and clangs, creating noises that sound like plates being dropped atop his snare). It's an invigorating ride, from the vertical takeoff of the opener to the unpredictable descent of the complex final track. Perhaps this disc isn't as memorable as Fell's compositional endeavors, but it refreshes and cleanses like a steam bath."
Jason Bivins SIGNAL TO NOISE

"Improvabilly finds Simon Fell working with two of his regular partners, the multi-instrumentalist Charles Wharf (playing tenor and soprano saxophones and bass clarinet) and drummer Paul Hession. The five long and brawling improvisations are named after paintings by Munch and Ernst. They proceed at a pace and volume that might be called "flat-out" if it weren't that the musicians every so often - at the end of The Interior of Sight, for instance - demonstrate that they've been holding something in reserve by kicking things up a further notch or three. This isn't music that gives a fig for such niceties as structure and developmental surprise: basically, each track is a continuous crescendo/barrage. What makes it work is the presence even among the most chaotic moments of a surprising amount of detail, of rhythmic and dynamic eddies. Paul Hession is in many ways the lynchpin of the session, and his admirably multidirectional work is well showcased on the sprawling 18-minute finale, The Angel of Hearth and Home."
Nate Dorward CODA

to see full press quotes/reviews for this album, visit www.brucesfingers.co.uk/catalogue/bf44reviews.htm