One Night In Burmantofts 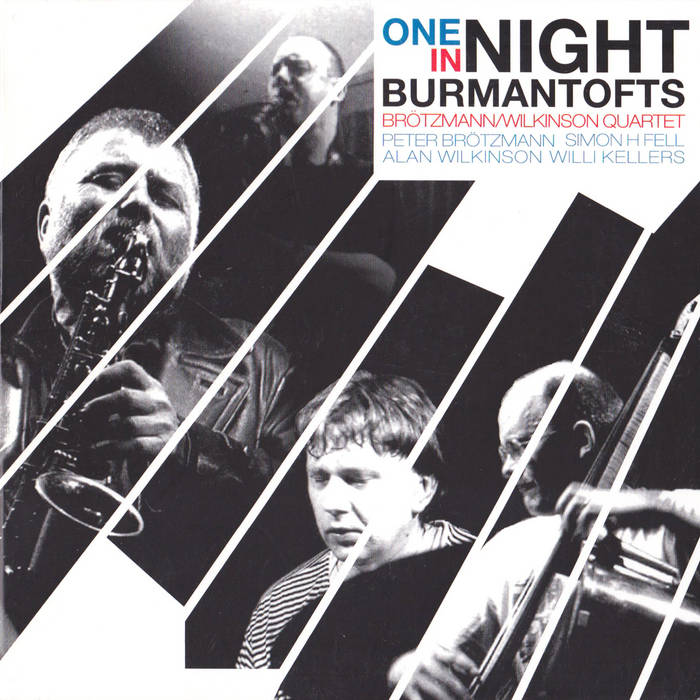 Available at last, thanks to Bo'Weavil, this is an excellent recording of a fine group playing a great gig. Plenty of heavy blowing of course, but also melodic and timbral explorations. Well worth the 11-year wait!

"As unabashedly cathartic as hearing Peter Brötzmann blow his lungs out atop a bracing rhythm section can be, it's often an even better proposition when he has company. One Night in Burmantofts chalks up another permutation in the tandem column of his catalog, one dating from a live Leeds gig in 1996. Co-conspirator Alan Wilkinson is well-suited to the partnership, having blown his share of stacks in frequent collaboration with drummer Paul Hession and in his own free jazz trio, Free Base. He's also versed in the vernacular of free improv, a language that informs the set's sporadic quieter sections with pursing reed pops, wordless vocals and other texture-based effects. Bassist Simon Fell and drummer Willi Kellers are inspired choices to rudder the rhythmic end. Fell is an improv celebrity in his own right and Kellers' associations with Brötzmann date back at least to the latter's late-'80s work for FMP. Despite the salutatory intimations of its title, Brötzmann offers little quarter on Greetings Herr B and Herr K, the opening eleven-minute slab of reed violence. He and Wilkinson charge forth from adjacent stereo channels, a barbaric tenor blast by the former answered by a teeth-baring sortie from the latter's alto. Fell and Kellers churn up a surging whirlpool at their flanks, before the waves break on a wounded cry from Brötzmann's tenor. Heated exchanges ensue and much gusting breath expels through moistened reeds. A coda of pointillistic bass and cascading cymbals ferries the piece out. At a few minutes shy of a half hour, Cormorant Number Two opens the playing field up further to Fell and Kellers as the quartet breaks apart into a series of subdivisions, starting with an invocation from the horns. Bells and arco drones bring the piece out of the customary Brötzmann brawn and bluster and there's a surprising spaciousness to the interplay, the elder German bending to the agency of his younger colleagues. A ruminative clarinet reverie backed by pattering brushes and fibrillating bass turns raucous, and later Wilkinson barrels forth with a prolonged barrage of rattling baritone blasts. Brötzmann eventually rejoins him on tenor with another anthemic spout of gnarled notes, ramping through a cataclysmic third act to an oddly anticlimactic close. Fatman and Little Boy in terms of musical kilotonnage, Bird Flew and All Back To Paul's explore similarly scorched earth territory, the first opening with an unexpectedly funky conversation between Kellers and Fell that leads into a seething tarogato and drums duet, quickly augmented by pummeling baritone and bass. Those who think they have Brötzmann summarily shoehorned would do well to check this departure out." Derek Taylor DUSTED

"The energy levels these four musicians reach at certain points of the set are just incredible: from the introductory combustions of Greetings Herr B and Herr K to the ribbon-like strands of duelling sax on the frenetic Bird Flew, you'll find yourself revisiting these virtuoso improvisations over and over again. Incredibly dynamic free music from top to bottom." BOOMKAT

"A long overdue meeting of two of the titans of the saxophone today. Alan Wilkinson and Peter Brötzmann together with Willi Kellers and Simon H. Fell blow up one hell of a storm. The individuals on this recording consciously commit, putting themselves 'out there,' over the edge. The energy, the electricity, generated by Wilkinson and Brötzmann, is a result of their fearless approach to the precipice and their willingness to stare, unblinking, into the abyss. And yet while this music, free jazz, improv, call it what you will, exists at the boundary of our cultural existence, it echoes the sounds first identified as jazz, back at the birth pangs of the modern age. It is the commitment to a collective sound devoid of ego with the fearless individual, that makes this music extraordinary, that provides the moments of almost spiritual communion." THE JAZZ LOFT

"It's quite serendipitous that I now get to review this CD, over a decade after I was there in the audience. Not surprisingly, musical sparks fly in all directions, reaffirming my long-held view that this was one hell of a night. Opening with Brötzmann's trademark hog call on tenor, the band quickly dive in as both reedsmen lock horns and head for the sun. Fell is heard at his most direct, needling the music forwards, whilst my abiding memory of the gig, Kellers' all-enveloping drumming, is beautifully captured in a pleasingly grainy mix. The drummer lays down a shimmering cymbal haze similar to Sunny Murray, but with the flick of a wrist unleashes a devastating onslaught that gives him the presence of two drummers. That said, this is far from wanton noise. Each of the three extended improvisations offers quieter nuances and lyrical beauty, sometimes close to silence. Even when the band is fully charged they're always playing in the same 'zone'. Whenever I hear Brötzmann's strangulated goose cry on tarogato I find it hard not to tremble. With his celebrity reaching a whole new generation of listeners there's been no shortage of new recordings of late. This one stands out from the crowd, candidly capturing him in his prime. Everything you could possibly want is here, and Kellers is the final clincher should you be wavering. Glorious take-no-prisoners free jazz." Fred Grand JAZZ REVIEW

"The difference between great improvised music and the worthy and workaday is a tricky thing to quantify. But by any definition this set is indeed great. Brötzmann and Wilkinson are supposed to be the sort of saxophonists who leave audiences cowering, but much of this performance is disarmingly beautiful, wistful even. Space opens around the musicians like Moses parting the sea. Brötzmann and Wilkinson trade phrases like an update of a 1940s tenor battle; when the baton passes to Fell's vigilant bass, he thrusts into the timbral stratosphere, and loops of feral sound prevail, the two saxophonists catching his tail and pushing the margins further. So why does this music stand out from the crowd? Perhaps because there's no contrived momentum or forced purpose; the correlation between pinhead structural clarity and complexity of gesture is spot on." Philip Clark THE WIRE

"The German saxophonist Peter Brötzmann's second album, Machine Gun (1968), replaced the squishy spirituality of the ecstatic jazz then espoused by Albert Ayler and John Coltrane with a pile-driving, brutal density. Four decades later, his collaboration with the north London free-improv kingpin and fellow saxophonist Alan Wilkinson is playful and, at times, almost pretty. The horns flutter at each other like squawking hummingbirds, prodded and poked by a rhythm section of the Batley colossus Simon H Fell on double bass and Willi Kellers on drums, and bound up in one of Bo'Weavil's typically tasteful packages." Stewart Lee THE SUNDAY TIMES

"One thing I am certain of is that if you can type to it it's not doing it, so I have turned off, for now, One Night In Burmantofts, to which I find myself either chasing a breathless forward momentum or hovering in insectoid hypnosis, indicative of how one of improvised music's key functions is, for me, that push into a new awareness or experience of motion and stasis. Burmantofts was recorded live in Leeds in 1996, well over an hour of relentless, edgy sound generated with a tightrope attitude by the two-headed titan. It starts off fluid, limber and punchy, and descends into scuttling weirdness, a darkly shamanic space evocative of thrumming forest sounds and barely-heard new language. Brötzmann and Wilkinson's sonic range is as impressive as their technique, with Brötzmann's tarogato adding an unearthly reed sound to the sax and clarinet alongside Wilkinson's muttering, growling vocal interjections. I'm drawn especially to the abstract, rummaging passages where each instrument's expected personalities are dashed away, no safety nets, into an environment more akin to electrical interference than anything generated by wood, reed, brass, skin, throat. Here, Kellers' dextrous percussion and the gulps and gasps of Fell's bass are what sets out the music's weird geometry, an almost oscillatory low-end, and as the reeds keen and collide at last, Bird Flew ferments into the avian brew its name suggests, doused in formic acid, set a-fizz." Frances Morgan PLAN B

"An astonishing celebration of free music, action and thought. In many respects the sheer force of the playing that forms parts of One Night In Burmantofts is reminiscent of Brötzmann's 1968 classic, Machine Gun. Albeit the line up is smaller, but the range of ideas and the tightly packed energy that is put into these three pieces suggests that a larger ensemble could have been responsible. The split opening section Greetings Herr B And Herr K/Cormorant Number Two is a healthy gust of fire breathing from Brötzmann and Wilkinson, with Fell and Kellers' bass and percussion insertions allowing new gateways of musical exploration to be opened along the way. Bird Flew is less frantic and almost serene as the horns dip and glide over intricate drum patterns and weaving bass, while the slowly simmering finale All Back To Paul's is more disjointed and abstract. When the track finally boils over the full power of this quartet is revealed in all its ear splitting, jaw dropping glory." Edwin Pouncey JAZZWISE

"At this stage in Brötzmann's career, the occasional small-group conflagration comes as a welcome change. Here, Brötzmann is in cahoots with the UK duo of reedman Alan Wilkinson and bassist Simon H. Fell, and German drummer Willi Kellers (whose first recording with Brötzmann was on 1989's A State of Undress, with trumpeter Manfred Schoof and bassist Jay Oliver). The acrid-toned Wilkinson and burnished hardness of Brotzmann make a complimentary pair as they lock in atop Fell and Kellers's swirling storm of time and units. The two saxophonists have a similar searing quality to their approach, so there isn't really a huge gap in phraseology (though Brötzmann's affection for the sandblasted, throaty swing-era tenors is in plain view). At the outset of Bird Flew, the pair finds a similar tarnished ground, one that might be recognizable to fans of the McPhee-Brötzmann quartet. Brötzmann's clarinet is in full, dervish-like force atop Fell's rubbery pizzicato and Kellers's mounting whirlwind, but it's Wilkinson's husky baritone barging in like a drunk at a Christmas party that really sets Bird Flew in motion. Kellers is surely the quartet's secret weapon, though - as Wilkinson and Fell fiddle and flit about their guest's tenor, lightly suspended cymbal work and subtle torn jabs interlock to a tightly-wound and busy web, a steady prod to whomever has the pulpit in this beautiful fracas. Though the regular groups certainly garner well-deserved press, it's sometimes the one-off that seals the aesthetic deal. One Night In Burmantofts is obviously a one night stand to remember." Clifford Allen SIGNAL TO NOISE