by The Mancini Project 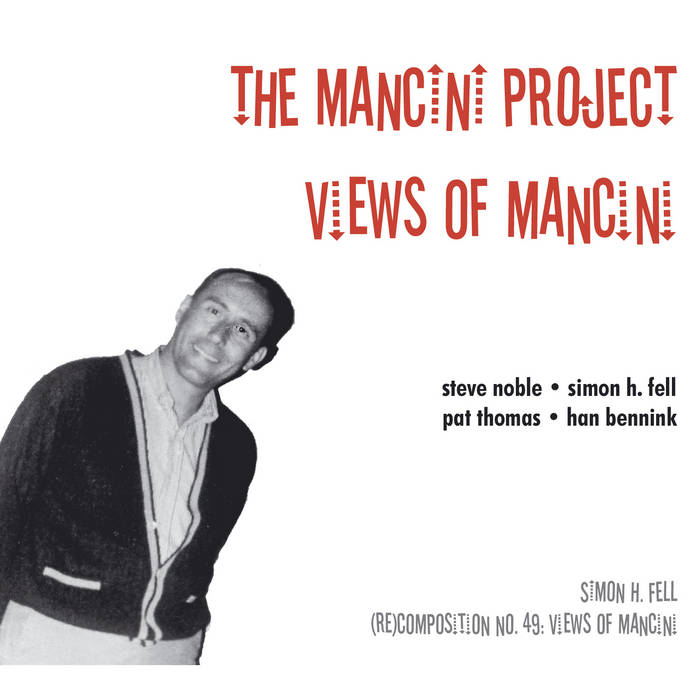 Simon Fell's (Re)Composition No. 49 - four experimentalists take on the repertoire of Henry Mancini, but without forgetting their avant-garde proclivities... Includes The Days Of Wine And Roses, Charade, Moon River, Peter Gunn, The Pink Panther and others.

"Although this strange quartet does actually cover seven of Mancini's themes, their versions are reconstructed and often mutated beyond recognition. On Charade we hear the subtle melody played skeletally on piano, bass and drums, while Mr. Noble spins in soft layers of eerie samples like a web of wonders. On Moon River we hear the soundtrack music from a scratchy record in confused layers while Mr. Thomas adds another layer of piano as a connected dialogue to this strange dreamscape. Peter Gunn has many layers of warped sounds like falling in a vat of molasses. Han Bennink is often the central player here, his drums providing the only anchor to the real world. Two of my and most folks favorite Mancini themes are found here as well, The Pink Panther and A Shot in the Dark. Both are also turned inside out and often warped beyond recognition, yet still have a dramatic aura that makes them feel like a soundtrack to movie for your mind. I get the feeling that it take a bit of time to fully appreciate all of the (buried) references and engaging ideas that Simon H. Fell and his colleagues have sown into this bizarre treasure."
Bruce Lee Gallanter DOWNTOWN MUSIC GALLERY

"These pieces are so familiar - built into the DNA of Western mainstream entertainment - that the result can be quite unsettling: the saccharine but distorted strains of Moon River conjuring a phantom Hollywood pool party viewed through a cocktail glass darkly. Other tracks stir up turbulent free jazz - with Thomas on athletic form - in which the subtleties of the vinyl manipulations struggle to compete, spurring Noble into urgent, high-pitched scratching that works surprisingly well as a signifier of chaotic energy."
Daniel Spicer THE WIRE

"The quartet of Thomas, Fell, Bennink and Noble creates a veritable hallucination consisting of exquisite free playing interspersed with fragments of evergreen themes by Henry Mancini such as Moon River, Peter Gunn, an unrecognizable Pink Panther and other less legendary songs. The idea came to Fell in 1999 and is realized through a mixture of scored and improvised "organic reconstructions" of the initial material (which can be heard, on and off, across the pieces under the amorphous shapes elicited by Noble's vinyl ghosts). It takes a while to penetrate the essence of this music but, once the preliminary diffidence is won, its volubility and neurotic blitheness welcomes the attentive listener with open arms. By enjoying the piece in a semi-hazy state of mind the experience is akin to a genuine trip constellated of apparitions of muzak orchestras amidst bitter acoustic pungency, Thomas' splintered figurations fitting stupendously in the full throated magma. When lucidity prevails, we just try and decipher the single components in an apparently incongruous superimposition of technically opinionated improvisations and unintelligible rambling from decaying films. Those voices and tunes may belong to the past but don't struggle in finding a precise collocation in nowadays' inquietude, an uncommon instrumental lingo that sounds congested and revelatory at one and the same time."
Massimo Ricci TOUCHING EXTREMES

“The first new disc to come through the letterbox in January remained a favourite all through the year. The Mancini Project is a droolsome quartet of improv A-listers (I mean I'm drooling, not them): Pat Thomas on piano, Steve Noble (best known as a drummer) on turntables, the inimitable Han Bennink on drums, and instigator Simon H. Fell on double bass. In their collective sights: the Henry Mancini songbook. The Pink Panther, A Shot in the Dark, Moon River, the Peter Gunn theme... all are present and deliriously incorrect. The opening take on Days of Wine and Roses sets the whole album up perfectly: it sounds like however many shards and spirals of music being surgically removed from Mancini's brain, along with the audio track to the odd half-remembered swimming lesson or car-crash. Thomas is on particularly astounding form throughout, flipping from Messiaen to Stockhausen to Cecil Taylor to Matthew Shipp to who-can-say-who in the space of a half-sentence. Two untitled improvised tracks create a welcome social space for these complicated individual voices to trade propositions and swap gossip with a stronger sense of the real-time encounter, but the overriding impression, as with so much of the best improv on disc, is one of radical edgelessness. The composed and the spontaneous bend round each other like melting Klein bottles, and it would be easy to believe that the soundworld fizzing and bubbling around you is being generated by a group twice the size. Mancini's originals are at times pretty occluded, as by some swirling multi-hued miasma of atomised cultural debris, though familiar phrases in odd translations indicate that everything is finding its way into the mix somehow; at other times, as on Moon River or Peter Gunn, there is an energising sense of celebratory obliteration, a wonderfully demotic music of graffiti gestures and affectionate mutilations. It's gourmet stuff, which both reveals more and teases more with every play: the kind of milkshake that brings all the really interesting boys to the yard.”
Chris Goode THOMPSON'S BANK OF COMMUNICABLE DESIRE