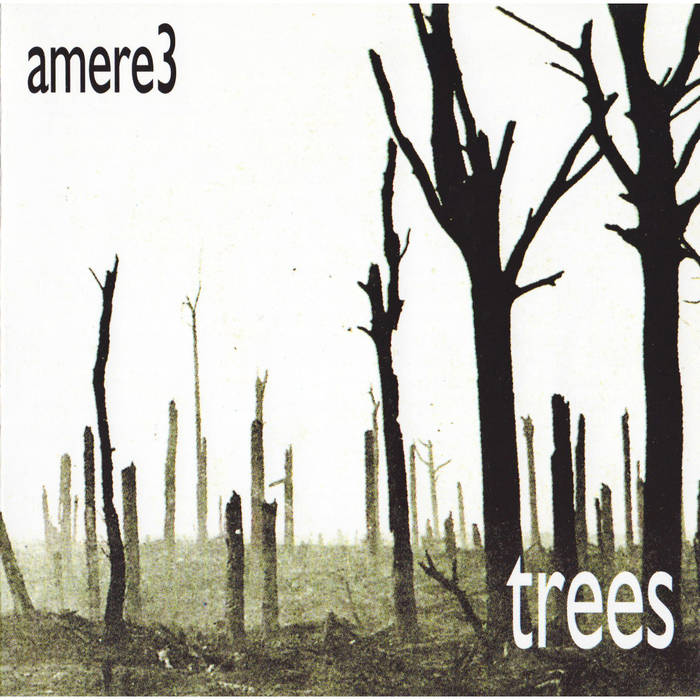 Intimate, conversational improv from a sunny day in Liverpool

"Phil Hargreaves has gone from Bonehouse to bone crushing in four years, and his music sounds even better for it. Four years after recording as one-half of the improv duo Bonehouse with guitarist Phil Morton, the Liverpool, England-based reedist appears as one-third of the co-op band, amere3. A reeds-bass-drums free jazz power trio, he's dispensed with guitar and effects in favor of a rough, jolting, but still sympathetic essay in the whys and wherefores of up to date BritImprov. Partners in this bumpy ride are Suffolk, England-based bassist and composer Simon H. Fell, an old hand in this context, having performed in similar groups usually with fire breathing baritonist Alan Wilkinson; and Hargreaves' fellow Liverpudlian, drummer Rob Dainton. All three have some shared history, having participated in the Frakture Big Band's renditions of Fell and Hargreaves compositions. Leaving his composer's hat at home, Fell instead works to integrate his lines within this democratic trio. Telepathy is the order of the day, for the session works well enough to invite comparison with discs created by the longstanding Evan Parker-Barry Guy-Paul Lytton trio with the same instrumentation. The skills of the other two are acknowledged, so discovery of the date would have to be the underrecorded Dainton. Within the combo context he can use his kit to suggest African hand drums as he does on both parts of Katsura, utilize drum rolls to maintain the tempo as in Madrona, and on Rauli, push along the tune with bass drum accents and cymbal suggestions. Throughout he appears to exploit cymbal tones more than most other so-called free percussionists. A commanding bass researcher, Fell seems to prefer his bow to his fingers on most of these tracks. Then again with it he's easily able to keep a constant sawing backdrop moving. Conversely on Gean, he puts aside some menacing low pitched rumbles to mix the instrument's highest tones with Hargreaves soprano saxophone yelps to such an extent, that it's often difficult to tell which notes have been blown and which fingered. Otherwise, he can turn around and complete Katsura Part 1 with a serene, finalized basso thump. Seemingly reveling in having such simpatico comrades, Hargreaves has plenty of room for saxophone sleight-of-hand. Katsura Part 2, for instance, begins to resemble an African rite with tenor sax false fingering, than dart and hide attacks, aided and abetted from what could be a rub board bass and "little instrument" showcases. Rauli on the other hand relies more on tart, double-tongued soprano saxophone mini-breaths, while Deodar, after a slow start of slap tongued tones builds up a full throttle head of steam on tenor."
Ken Waxman JAZZ WEEKLY

"Phil Hargreaves was half of the very happening Bonehouse, and we've been waiting for a long time to hear something new. He's a talented saxophonist who has a little of Charles Gayle's stuttering, staccato phrasing and some of Evan Parker's attraction to small note-groups. His playing has matured considerably of late, and this is impressive stuff from him. Fell is another player we haven't heard much from lately, and here he plays furiously and very up-front, which is welcome. He is squeaky, percussive, even melodic; a perfect foil for Hargreaves and well in tune also with Dainton's rolling drums. Indeed, Dainton fills every corner of this disc with fascinating rhythms. He's a man we expect to hear a lot more from in the future. There's something about this album which is very reminiscent of the mighty and enigmatic VHF, but the energy level couldn't be more different. Here all three play with gusto, and it works, as ever with such things, because they're able to listen so closely to one another, and respond so fast. This is immensely impressive; it will enormously repay the effort of getting hold of it."
Richard Cochrane MUSINGS

"This trio plays uncompromising free improvisation out of all trends the genre has known during the '90s. Actually, the music draws from everything, literally: the ardor of Evan Parker, the jagged abstraction of Derek Bailey, the silence-conscious music of John Butcher and Radu Malfatti - there's even a bit of free jazz occasionally, like in Madrona. Drummer Rob Dainton is an unstoppable machine. He doesn't play necessarily loud, but his level of activity recalls Paul Lytton: feverish. He is the motor of this music and when he stops walloping around to, say, softly bow a cymbal, time freezes, as the listener is left gasping for air in a sonic vacuum. Bassist Simon H. Fell, still cruelly underrated, delivers a strong performance any fan of Dominic Duval should hear. He is inventive and useful, two adjectives you don't see together that often. Phil Hargreaves provides the high register either on saxophone or flute. His extended vocabulary still makes room for Coltranesque jazziness here and there, not unlike Paul Dunmall. The level of communication within this trio is beyond reproach. The musicians manage to create exciting moments, full of tension as to what will happen next. The two-part Katsura stands out as being particularly generous and includes a solo by Dainton. Hargreaves deserves more attention, as Trees proves beyond doubt."
François Couture ALL MUSIC GUIDE

"Hargreaves has a huge sack of technique and extended technique, from which he instinctively pulls expected, unexpected, and sometimes soothing sound-balms and blams... you can hear the valves opening and closing, feel him try to shove both lungs through a flute in a tornado blast. Dainton's drums dance, dodge, drip and dribble - as he deploys a vast range of tone, a noteworthy and remarkable talent; and Simon Fell's bass is clothed in such a colorful and disparate rack of hand-technique that, like Lon Chaney, it can become unrecognizable as itself. A CD of high quality, considered and sensitive improvisation, worth having."
Bret Hart THE UNHEARD MUSIC

"amere3 is a sax/bass/drums combo trying to find its own sound within a group format that has a strong history in free improvisation. They succeed in part; they do not sound like any of these groups. Hargreaves' saxophone has certain echoes of Evan Parker, especially when he unleashes flurries of notes during the more intense sections of this music. Drummer Rob Dainton has a nervous kinetic style that pushes the music forward in lurches. He has a lot of energy and knows when to unleash it and when to lay back. Best-known member of the trio is bassist Simon Fell. He fits in well with this group and (at least to this listener) seems to be at the apex of the triangle. The trio seems grounded with Fell's energy and his interplay with Dainton seems to be what holds these improvisations together. There are some shining moments here. The latter, quiet part of Katsura Pt. 2 is a remarkable passage of sustained interplay. Coigue is another example of this trio's subtlety. And the opener Deodar is a burner."
Robert Iannapollo CADENCE

"amere3's debut CD goes beyond idiom, managing to sound profoundly foreign to these ears for most of its duration. Not foreign as in Albanian or Macedonian, rather the group's obvious rooting in free jazz - we have a bass/sax/drums trio here - is flung aside, though without the group lighting out for the VHF approach (VHF share Simon Fell as bassist with amere3) of sparse/dense, non-specific noise-making. This stuff is lyrical, though whose lyrics I can't tell. To paraphrase Derek Bailey - in whose tradition is this? This is world music as it should be - of all worlds and no worlds - this is free jazz as it can be, without the frenzy, but with the foreignness and the surprise that the best improvisation can have."
Chris Atton THE SOUND PROJECTOR

“Every created note is evidence of an astonishing co-operative sound. The three musicians have forged sounds as words which are completely mutually understood – one of the achievements of jazz’s century of history and defying all internal categories. Surprise in artistry all the way.”
Chris Searle MORNING STAR