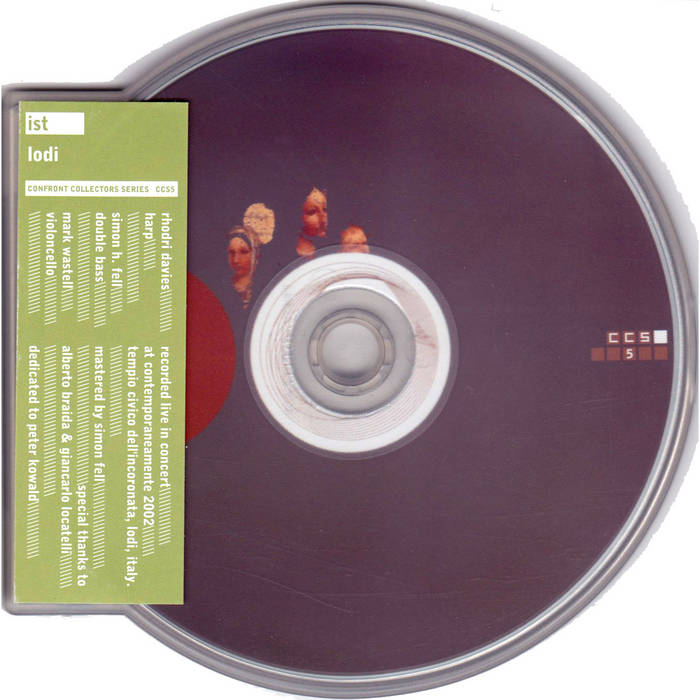 IST's fourth album is perhaps the first one to accurately represent their mature style. Whilst Anagrams To Avoid and Consequences (Of Time and Place) are documents drawn from early stages of the group's development, the later Ghost Notes also remains atypical because of its use of pre-composed elements.
Lodi is purely improvised music from 2002, however, and represents the finest flowering of the introspective, meditative yet tense style that the trio developed after the Ghost Notes tour.

"At the outset there's still something from the outside world creeping in: a bell tower, voices of toddlers. The musicians taste the air with a few touches. Then, an almost unnatural hush fades in and a slow dance comprising explorations of the most obscure innards of interplay begins. Davies conjures up intramural reminiscences and ghosts, alternating acrid squeals and hollow-voiced bumps that are perfectly related to the venue's natural reverberation. A game of percussive call-and-response is then initiated, with Wastell and Fell introducing their own voices via tentative inquiries first, then through mute scrapings that raise questions destined to remain in some sort of pleasing limbo, before one realizes they were answers instead. One of the most interesting effects of this process is the state of alertness it generates, which is also reflected by a tangible concentration both among the artists and by the audience. Beginning the second movement, an impressive example of control in which only feeble faraway harmonics and laconic orchestrations of zinging strings are heard, we cuddle an illusion of definitive return to silence but are soon deluded by the most vibrant series of intersecting discharges, complete with scientifically placed wooden thuds and droning jolts. We're also treated with harshly shrieking, short-length ostinati introducing us to passages of subsonic grumble that would love to be turned into a gorgeous lyrical swan; but it's too late, as a thick mist of doubt comes right back to suffocate everything, a final conversation of clicking and ticking imagery closing the show, final silence broken by a hearty, well deserved applause." Massimo Ricci TOUCHING EXTREMES

"I've only heard IST live twice, I think, but I pretty nearly died both times. You just stop breathing. You're there on the edge of your seat (yes, you're probably sitting down, there's not much of a moshpit to speak of) trying not to breathe in case you're louder than they are but you've already stopped breathing anyway because of the quickness, the anticipation, the precipitous angling. The three substantial tracks on Lodi were recorded in 2002 -- four years on from Ghost Notes, their previous (extremely fine) CD, which was anyway mostly composed material -- so this is at any rate a rare and valuable record of a vitally important group, but it also, more particularly, indicates the currents and tendencies of development in their collective language in the years since their earlier disc: and to some degree it also reflects the largely parallel shifts in focus and emphasis that had come to prevail more widely (though not as dominatingly, perhaps, as is sometimes reported) in the improvised music scene in London at that time. To specialists, then, this release will appear exactly crucial: but it deserves, and will endlessly repay, the attentions of any alert and interested listener. The textural world of Lodi is sometimes abrasive, often eerie; sometimes conversational, sometimes profoundly reticent. A very real and impressive intimacy is possible: by which I mean you can get extremely close to this music: and it is encouraging of that -- not at all of the rebarbative or hermetic or boffiny character you are sometimes led to expect. The technique of these players is astonishing, but that's effectually one of the least important things about this challenging and bountifully rewarding, beautifully made disc." Chris Goode THOMPSON'S BANK OF COMMUNICABLE DESIRE

"Truly a seminal improvising group. This trio was the perfect setting for the three to develop their strategies to micro-gestured improvisation. Though the setting for this performance was a classical music festival, the trio's set was comprised of three collective improvisations. Fell, Wastell, and Davies have each developed approaches to playing that deconstruct their string instruments to their essential components (strings, wooden sound boxes, bows, bridges and pegs) and the sound source of vibrating strings, harmonics, overtones, and every manner of scraped, scratched, beaten, bowed, and otherwise prepared timbres. It is their intensified approach to collective listening and interaction that elevates this beyond the astonishing display of extended techniques. In these improvisations, space and silence play as key a role as the sounds that are played. All three are keyed in to formulating improvisations around texture, timbre, density, and duration of sound. The erudite structures emerge with a riveting attention to nuanced detail. And while it was recorded almost five years ago now, it has lost none of its freshness." Michael Rosenstein SIGNAL TO NOISE