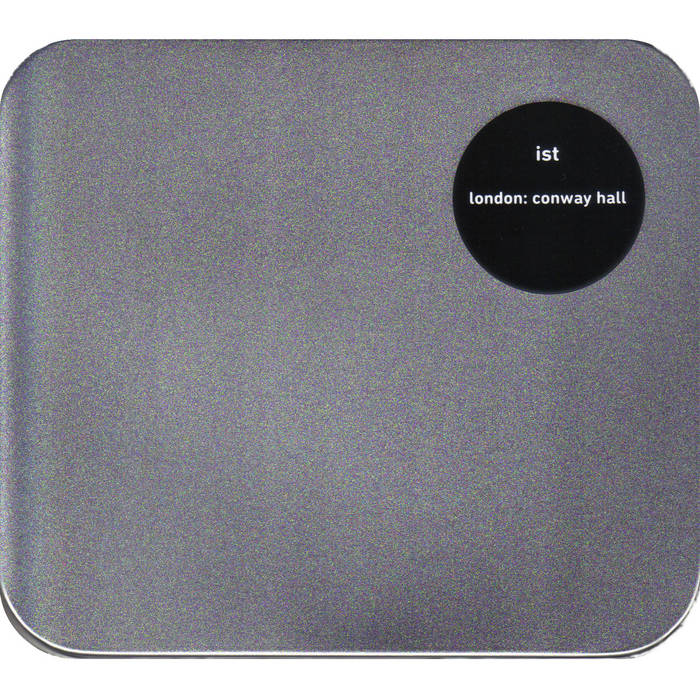 John Cratchley Quiet and intense...every second feels so considered,every note and sound placed with care and the musicians feel completely 'wired in' to the moment of performance...
Three extraordinary performers producing work of huge integrity,I think.

IST's performance from the 2003 Freedom Of The City Festival has never previously been available in its entirety. It shows the trio digging in to the reductionist mode which was to mark their later period, with another 'manifesto' performance from London's key improv festival.

"Most captivating of all was the bewitching set played by IST, hushed chamber improv that might as well be played by the creatures in the rafters of Conway Hall." Jason Bivins ONE FINAL NOTE

“It opens pensively, possibly a bowed harp with pizzicato from the strings, the bass more forcibly, but everything calm and considered. There's an air of mystery, the bass staying more or less in tonal areas, but also an uneasiness occasioned by the odd forte pluck. Fell worries this territory consistently for a while, substituting fine, deep bowings for the pizzicato, the others remaining sparse and attentive. Davies does a fantastic job of extending the space via some fairly harsh but beautifully placed whacks at his harp, Wastell's dry rubbings establishing a palpable aural distance, really excellent. About two thirds of the way through the music takes something of a turn, becoming more agitated and active, reminding me a bit of Derek Bailey's mode of attack, still paying attention to space but filling it with more jagged shards, including harsh harp strokes. It all works, the mini-explosions hovering convincingly, creating fine tension. A very good set and, I think, my favorite thus far among these archival releases.” Brian Olewnick JUST OUTSIDE

"The disc contains a short piece of music, just under 23 minutes, but the concentrated format helps to do the music full justice, since it necessitates a incredibly loaded listening that requires maximum attention. It is 'London Silence' in its full glory. the music goes slowly, slowly, is extremely low volume, and the musicians' focus is total. Because the music is almost entirely static, small displacements feel dramatic and the details are developed and brighten before our ears. The incredible thrill of playing so delicately that it barely sounds, the excitement of knowing that the slightest misstep can be disastrous, the excitement of expressing so much with so little makes London: Conway Hall unforgettable listening." Joacim Nyberg SOUNDOFMUSIC

“This disc consists one 21 minute piece which seems to be just enough since it is excellent throughout. It is superbly recorded and there is complete silence in the room between the sounds. Immense suspense with carefully balanced nuance. I had to turn off the AC (and suffer) in order to hear all of the sounds and space on this disc. The tension and release are often breathtaking. Since I am in another room from where this disc is playing, I waited more than five minutes in silence not knowing if the disc had ended to not. I listened to the silence most attentively hoping it was not over. Alas.” Bruce Lee Gallanter DMG