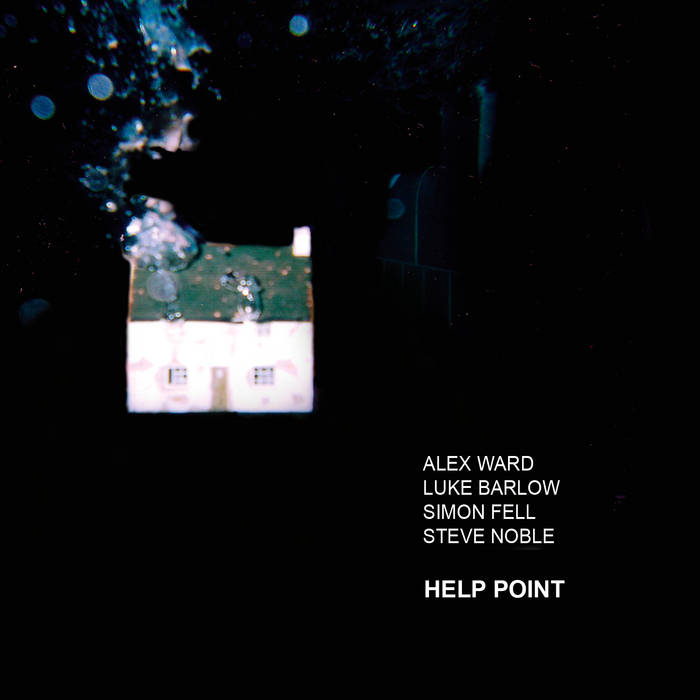 "Endowed with sharp interactivity and instant productiveness, this quartet led by clarinettist virtuoso Alex Ward hammers out many angles of contemporary improvisation's paraphernalia through its serious approach to polyvalent timbral ecosystems. Filthily tweaking an Oberheim and a Rhodes piano, Luke Barlow machinates through many and one intricacies, creating a fertilizing substratum of sonic working knowledge, while Simon Fell's maximizing bass playing is a spectacle in itself, as smoothness and mystery seem to be the source of numerous silent insurgences against corporative sight-readings of intellectualist commonplaces. Steve Noble sounds articulate and hungry, his technique a picture of dynamic prowess which is totally functional in this mature four-way encounter; on top of everything, Ward's incisive comunicativeness delivers his instrument from the humdrum indecencies of untrained pretenders while establishing his authoritative voice as one of the most brilliant in the free-for-all world of phoney immaterialism." Massimo Ricci TOUCHING EXTREMES

"Barlow's subtle electronic colourings hint at the colours of 1970s fusion but the mood is noticeably darker. Noble's hi-hat suddenly evokes Big Sid Catlett's cheery swing but then the steady pulse shatters. Ward makes his clarinet holler like a baby crying and shifts the mood decisively towards newly fertile territory, intriguingly undefined. You need to have played a lot of improvised music to produce a set with this kind of depth and scope." Philip Clark THE WIRE

"The four dive in to a series of short pieces that bristle with a taut intensity. Ward gives evidence as to why he is one of the premier clarinet players working in free improvisation. With phenomenal control of the finicky instrument, he can jump from the low, warm range to split-toned flutters and skirling overtones with ease. He is particularly impressive when the four flip to overdrive with lines that careen with abandon over searing free grooves. The contrast of clarinet with Barlow's Fender Rhodes and Oberheim OB32 digital organ works particularly well as the keyboard player shifts from sheets of quavering chords to hyper-charged flumes. Fell moves mercurially from nimble, bounding lines to scrubbed and scraped textures to quavering layers of arco to rumbling, propulsive counterpoint. It is particularly intriguing to hear him drop down rumbling, walking lines in synch with Noble's chattering drums against Barlow's tumbling Fender Rhodes chords. Noble, as always, is the one to have behind the kit if the music is to move from loose, free abstraction to punk-energy drive. No doubt that this would be a killer group to hear live, but the studio session captures every nuance of the broad range of densities, dynamics, and energy of these pieces." Michael Rosenstein SIGNAL TO NOISE

"Alex Ward is one of those players who seems to get interesting music out of anything he touches. His new album Help Point features him on clarinet throughout, though it draws equally on the rock-guitar side of his personality: the fuzzy, retro fusion sound of Luke Barlow's Rhodes and organ isn't something you usually hear in an improv context, but it works beautifully, as Barlow throws all sorts of outlandish spatterings and growls on top of Fell and Noble's pungent inside/outside grooves. Ward has a tremendous command of legitimate and extended techniques - he gets sounds out of his instrument that would have taken Zorn an entire tableful of duck-calls - but holds to a strong, fine-nibbed sense of line throughout, leaving a skein of inquisitive tracings across the music rather than (like many improvisers) putting the emphasis on sheer texture. The result is an album that feels surprisingly light in touch even though it sports some tremendous bone-crunching grooves (The Deil's Head and The Cronk) and the occasional bit of hydraheaded mayhem (Help Point Shut). Anyone whose head's been turned by Ward's remarkable contributions to Simon Fell projects like Four Compositions and Compilation IV (or who has encountered him in the oddball noise-thickets of the Incus release Limescale) will want to hunt this disc down, one of the first releases on Ward and Barlow's new Copepod label." Nate Dorward PARIS TRANSATLANTIC

"The Ward Four includes bassist Simon Fell, whose large scale compositions have been as well received as his work with classic Energy Music trios, and drummer Steve Noble who started his career in jazz-funk bands and was involved in a few of guitarist Derek Bailey's Company Weeks. Another participant in Company Weeks at an incredibly young age was Ward, yet unlike the others, he also played in a number of unabashed rock bands. So did and does keyboardist Luke Barlow, although he also composes so-called classical music. Help Point identifies the brand of Barlow's axes in the booklet - Rhodes, Oberheim OB3-2 - yet one of the most impressive constructs of his playing is that the rank electrical impulses aren't exploited on the disc. His keyboard expertise allows him to imply samples that elsewhere would come from electric guitar or bass, organ or synthesizer, without also attaching the pernicious bluster of the fusion Visigoths. The Cronk and The Mumbles, for instance integrate electronic imagery into a mostly acoustic output. On the former, Barlow quickly moves from guitar-like strumming to triggering jittery waveforms, after Ward first growls a straight line that turns to curlicue trills. As the clarinetist continues to sound out contralto staccato lines, tremolo fills and buzzing synthesized runs appear from the keys along with cymbal slaps and floor tom bounces from Noble. More restrained, The Mumbles, features crossed pulsations and sine-wave flutters and signals from Barlow that eventually evolve into piano-style comping. Fell's col legno jettes and the drummer's cowbell raps and patterned rim shots help Ward moderate his speed-of-sound bird-like chirps that ultimately moderate to back-of-the-throat screeches and young animal squeaks. Minimalist impulses are added to The Noup as Noble's barely perceptible cymbal clanging make common cause with Fell's arco continuum, until a looping synapse from Barlow develops into a duet of rubato resonation with the clarinetist. Ward twitters in a straight line then accedes to staccato multiphonics to meet the keyboard pulses. As the reed man flashes double tonguing, the drummer introduces powerful press rolls and the bassist concentrated sul tasto swipes that meld with Barlow's pedal point. Summation involves Ward rotating intricate grace notes. Contrast that group performance with The Devil's Head and Help Point Shut. Organized around Ward's skills on the wooden single reed - he has also recorded as a guitarist - the former begins with a vocalized tone on his part that slithers to chalumeau register, the better to mix with Barlow's pulsating oscillations. As the plugged-in keys spew polyphonic rhythms, the clarinet turns to legato coloratura timbres. When the keyboardist rides the changes with harmonic fills, Ward overblows a more pressured passage that almost sounds like tots giggling. With the reed trills taking on a Klezmer-like tinge, Barlow's wave frails reach guitar-like quality, Noble accents his rim shots and Fell strokes his strings. High-pitched reed whistles from Ward and sine-wave rasps from Barlow combine into a throbbing pulse that serves as the finale. Fell, almost conventionally walking and Noble cuffing his cymbals are more upfront on Help Point Shut, as Barlow provide near-acoustic piano swirls and jabs. Attaining a measure of thwarted emotionalism, Ward structures a meandering melody of trills and vibrations as the drummer backs him with rumbling ruffs. Similar textures from the lower reaches of the clarinet added to mid-range bass pulses make up the coda. Jarring when they deem it necessary and pliable when the music needs it, this quartet concentrate their influences into characteristic sound tracks. They deserve a listen." Ken Waxman JAZZWORD