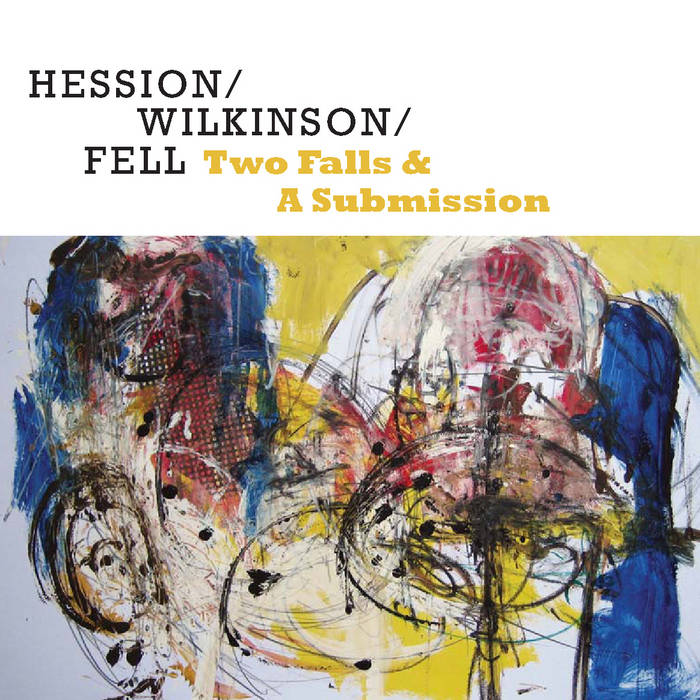 At long last - a new HWF live album! Recorded in March 2010 in Monmouth in the UK, this features the three bald blusterers in fine form...

“This album will surely blow your socks off, and I can already start by highly recommending it to anyone interested in forceful free jazz and in sax trios. The three lengthy pieces on this album are freely improvised, yet all three have an uncanny sense of unity and direction: raw, merciless, powerful, loud, but interestingly enough never noisy - although that is of course relative. The trio has been playing and recording together for the last twenty years, and that can be heard, felt even, as all three move forward as a three-headed monster, but then one with a heart as big as it is raw, because they do not shy away from emotional delivery. Sometimes the storm dies down a little for slower, calmer moments, yet the intensity and the raw sensitivity never diminish, an amazing accomplishment. The trio demonstrates how musical drive, expressivity and forward motion can be achieved without clear rhythm but with incredible pulse and collective energy. It is in any case their best album so far, rawer and with a more attentive audience than on 'Bogey's', with more unity and coherence than 'foom! foom!', less chaotic and with better sound quality than 'The Horrors Of Darmstadt', ... and it shows how the trio has managed to perfect its style and approach, making it even more direct, more impactful and cohesive. The real deal in free jazz!”
Stef FREE JAZZ BLOGSPOT

“In their heyday in the ’90s, the threesome was an awesome prospect both live and on disc; all three played with the kind of wild freedom that had characterized ’60s free jazz (yes, jazz, not improv) but had not been heard much since. Around 2000, after the release of 'St. John’s' on the Ecstatic Peace label (proprietor Thurston Moore was a fan), they went their separate ways. When their 2010 reunion tour was announced, many wondered if the three would still generate their former fire. They need not have worried. Right from the first notes of the opener, First Fall, the years fall away as all three simultaneously hit top gear in a bravura display of high-energy improvisation. Wilkinson immediately grabs the limelight, straight away playing with a raw intensity that other saxophonists might hit once a night; for Wilkinson, that is the baseline from which he then builds. Alternating between saxophones, he solos relentlessly, keeping a seamless barrage of phrases flowing from his horns. When he does intermittently pause from blowing, he is likely to pour forth improvised, wordless vocals with as much gusto as he plays. It seems entirely appropriate that 'Two Falls & a Submission' takes its title from the parlance of all-in wrestling. Hession and Fell never act as support players. Throughout, the drummer matches Wilkinson’s intensity, never letting the pace flag so as to keep the pressure up. At times it sounds as if he and Wilkinson are involved in a one-on-one duel to see who will crack first; of course, neither of them does. For his part, Fell stokes the fire with his own propulsive phrases, constantly driving things forward and holding them together. The end result is an amalgam of three equal contributions that fit together perfectly; the absence of any one of them would make the whole feel incomplete. Even when the three move down a gear — as they sometimes must, given the relentless pace they set — they still retain all the qualities that make this trio special: intensity, togetherness, equality. Awesome stuff.”
John Eyles DUSTED

“If you’re a Briton of a certain age, the Hession/Wilkinson/Fell trio were the antidote to clichés about English insect music; to anyone else who caught on, they were evidence that free jazz of a very high order was not only still being made, but it didn’t have to sound just like records that were recorded before anyone saw that posthumously released picture of Lyndon Johnson with long hair. Then they spent a decade doing other things, some of them quite superb, but nothing quite the same as this trio — proof positive that they were on to something not only great, but essentially personal. Those guys had chemistry. Then they got back together in 2010; if you were that Briton, this record, made in Monmouth during that reunion tour might be proof that the guys still have it. The rest of us, who haven’t been so well situated geographically or temporally, will have to settle for saying that this is (ahem) free jazz of a very high order, capable of hitting as hard as your favorite Brötzmann-led combo, playing as nuanced as your favorite Parker/Guy/Lytton set, and audibly, utterly in the moment.”
Bill Meyer TOKAFI

“Two Falls & A Submission, recorded in Monmouth, is the first proper Hession / Wilkinson / Fell disc since 2000's St. Johns on Ecstatic Peace!, but the trio hit like they hadn't missed a beat. On First Fall they jump in feet first: Wilkinson's baritone is searing and ecstatic, while Fell's painterly blend of arco and pizzicato triangulates the saxophonist's shakedowns and Hession's massive, angular swing. Once the saxophonist moves to alto, they work through soft and sinewy interplay, Fell and Hession breaking up time with intricate patterns, though they quickly return to characteristic peppery shouts. The Submission begins with a mêlée, furious arco and floor-shaking rumble a diabolical assist to Wilkinson's lung-busting, ruddy-faced salvos. Following a passage of guttural sparseness, his alto is front and center and the trio moves towards freebop in a manner recalling Brötzmann, Parker and Drake – harrowingly intense, but kind of groovy. I'm tired of hearing English improvisers described as coolly detached (you still hear people say that), especially since a group like HWF is so full of red meat and fire.”
Clifford Allen PARIS TRANSATLANTIC

“Fell’s recordings with Wilkinson and Hession were probably the first to garner notice in the international press. Here was music that exploded, picking up on the precedents of American and European fire music and hurtling them forward. Two Falls & A Submission captures the group during a 20th anniversary tour, and they burst out of the gate with Wilkinson braying full-bore over Fell’s churning rumbles and Hession’s thundering salvos. While there’s no shortage of bluster and muscle, there’s also a structural sense that begins to reveal itself as Wilkinson blasts forth phrases which get looped, inverted, and shredded over his partners’ momentum. Fell and Hession function as far more than just a rhythm section: one can hear Fell pick up the reed player’s ideas and thread them into his roiling fury, and Hession responds with crashing cymbals and volatile thwacks. The three improvisations aren’t quite unrelieved in their fury, balancing molten force with passages of open, textural interaction. This set is full evidence of a power trio still on top of their game and this is their best-recorded document yet, revealing the full range of their sound.”
Michael Rosenstein SIGNAL TO NOISE

to see full press quotes/reviews for this album, visit www.brucesfingers.co.uk/catalogue/weavil44cdreviews.html