Consequences (Of Time And Place) 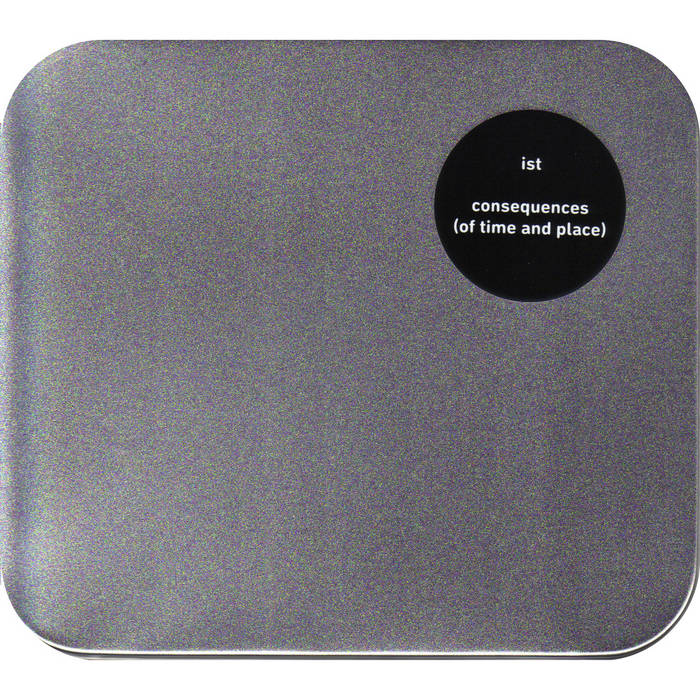 The latest in the Confront 'metal box' collectors' series is this reissue of IST's 1997 album, recorded at the Natural Music Club in Stockwell, London. Representing epsode 2 in the development of this group, the music sits interestingly between 'Anagrams To Avoid' and 'Ghost Notes'.
The music is often still quite active, but with the first signs of the distilled nature heard in later work. The recording quality is surprisingly good, with just a few typical digital artefacts to remind us that this was captured on a 1990s portable digital recorder, plus a little occasional traffic noise to remind that this was London, after all.

"Hard to imagine that a chrome analogue cassette could deliver state-of-the-art sonics to test any sound system, but IST operate at such a pitch of invention they transcend the divide between art and science. Harp, upright bass and cello are played at the horizon of known technique. Simultaneously lush and abrasive, the trio push string sounds into new zones of strange beauty. Barbed bouquets explode before the ear, aural events that leave the imagination ransacked.. The only comparisons are Zorn, Furt or Dumitrescu. Because of their ensemble panache, IST – uniquely in today's 'jazz' world – also exhibit the joyous zing of Bebop. Brilliantly recorded in consciously overlapped ambiences, the musicians' electric sensitivity to timbre causes sparks to crackle across the room. Inspirational. Psychic, even. A*:1*" Ben Watson HIFI NEWS & RECORD REVIEW

"The concentration on acoustic stringed instruments lends both an unusual range and an enviable specificity to the group sound . . . . . conventional notation has not a hope of capturing their individual vocabularies. Davies is probably the only player around making such extensive use of preparations on the harp; and he proves that such an approach can bear fruit in an improvising context. Wastell's cello is a source of some beautifully controlled harmonic clusters, while Fell, who is rapidly becoming one of our most respected composers for improvisers as well as one of the finest British bass players of his generation, has a hundred ways to make a noise with his bass aside from actually playing notes. For much of the time, however, these noteworthy individual voices are surrendered to the greater cause of the group sound. All three are often immersed in an anonymous scratching and rattling which superficially implies that their instruments are under attack from hungry chickens, but which actually contains a wealth of detailed melodic and rhythmic information relating directly to its larger musical context. The group covers the whole spectrum from near-silence to high-energy screaming, normally in a controlled but organic fashion. It is something of an achievement that the level of intensity of the group's playing has not in the least diminished in the period between this recording and Anagrams To Avoid – in fact the added impetus of the live setting seems to have made the music even more hair-raising." Richard Cochrane RESONANCE

“The club recording thrives on tensions that build from Fell resolutely reining in. We listen differently today, in part because of recordings such as these.” Julian Cowley THE WIRE