by The Geordie Approach 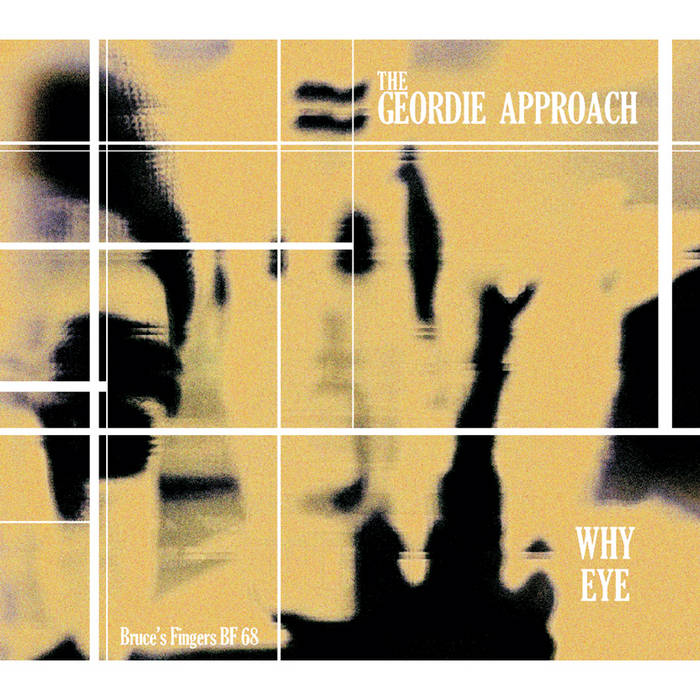 The debut album from this exciting young Leeds-based Anglo-Norwegian group. Behind the jokey titles lie some superb slabs of heavy-duty free-rock/electronics, somehow managing to groove without compromising their challenging modernity. See what you think.

"The music is experimental and collects inspiration from a wide range of sources, both acoustic and electronic, and from rock, jazz and noise. Although the underlying melody and rhythm in the music is not necessarily easy to get hold of initially, the collective are aware of the use of dynamics to achieve their goals in their "conversations". It is not easy to hear who is playing solo at different times - but that's not important. (Frost Fadnes has also "camouflaged" his saxophone through lots of electronic devices so that is is almost impossible to hear a traditional saxophone tone during the recording.) There is no doubt that the music is tough, original and different." Tor Hammerø NETTAVISEN.NO

"From the beginning they take you on a wild ride, a constant stream of high energy improvisations on the same level of intensity. Tracks like Gascoigne or Shearer, with great guitar work by Sharkey, come close to a kind of free rock. MacDonald shows them from their most introvert side. Upon an abstract sound environment Fadnes plays his almost melodic lines. And so they take different approaches in building up their improvisations. And yes, they do this in a very fresh manner. What the seven pieces on this CD have in common is that they all deal with heavy and noisy improvisations. Drums and (distorted) guitar go very well together with the untransparent and rough electronic sounds that dominate their outlook. Robson, the final track offers some demented 'funky' stuff and impressed me most." Dolf Mulder VITAL WEEKLY

"From the first violent spew of twisted electronics, it's obvious that this is a gnarled addition to the growing canon of 21st century free-noise-jazz. Bringing together Sharkey, a leading light of the Leeds Improvised Music Association, with two movers on the Norwegian scene, The Geordie Approach seem to have tapped into the drone-laden psychedelicism of the noise underground, while keeping a foot in the heavy acid-funk of On The Comer-era Miles. The result is a little like Scorch Trio and Supersilent playing dance tunes for brain-damaged ravers. Sharkey's guitar rips through caustic, stinging Sharrock-isms like it's in a very bad mood, and Fadnes keeps his alto smothered under layers of menacing effects, while the two of them spin out head-splitting electronic treatments, from cavernous doom echoes to lush, futuristic synth-sirens. Beneath it all, Birkeland thrashes the kit with grim determination, pushing it forward like a Haitian zombie trying to get on the good foot." Daniel Spicer JAZZWISE

"All seven titles refer to past football heroes of England's premier league and national team, all North-East England Geordies, but behind these humorous titles lie uncompromising and challenging attempts to link a broad range of musical flavors, from free improvisation through indie rock to raw electronics and noise, all without loosing their groove-based textures. The trio's condensed energy, just on the verge of violent outburst, can be heard on the opener Beardsley, sounding similar to Finnish/American guitarist Raoul Björkenheim's Scorch Trio. The trio's abstract envoys on MacDonald come close to the musical territory of Norwegian electro/improv quartet Supersilent, where Fadnes and Sharkey toy with ambient, analog sound sources, and on Keegan, where they construct an eerie, mysterious soundscape. The trio succeeds in articulating a firmer original voice on subsequent tracks, and weaves the contradictory approaches of its members on the longest track, Gascoigne, Shearer and Milburn, where the players pursue their incessant and tribal-metallic drumming, funky guitar acrobatics with heavy doses of distortion, and inspired noisy ambient-grooves; but all sounding as though converging organically into one close musical sphere. The closing Robson is a sometimes focused, other times looser and funk-based piece, with some noisy and distorted ornaments, but still uncompromising and determined in its structure, much as football player Bobby Robson was in his finest hours. Original and daring." Eyal Hareuveni ALL ABOUT JAZZ

"We could define Why Eye as an interesting experiment of dissident improvisation where a post rock influence is certainly the most evident trait, this assumption corroborated by the great relevance given to Sharkey's stringed depictions of surreal atmospheres where pseudo-calm elucubrations are disturbed by their Mr.Hyde versions (pitch transposing and mutated delays are pretty frequent in the menu, most notably in Keegan). But when the going gets tough, cascades of distortion, rumbling rolls and dirty-as-a-tennis-sock utterances coalesce into a turbulent cauldron where moderation is not an option (Shearer), with sweat and blood dripping out of a sonic mass whose formula is something around the lines of "take no prisoners". Bleak-skinned loops and additional deformations are to be found in the medium-danger Milburn before Birkeland decides again that drums can be a destructive weapon, while Gascoigne shows quite a bit of technical dexterity from all the players. All in all, a nice handful of spiky timbral explorations - picture the out-of-wedlock son of a Massacre/Rob Mazurek date minus the trumpet - which leaves me hopeful enough for future developments." Massimo Ricci TOUCHING EXTREMES

"This debut release by the Norwegian/ British trio The Geordie Approach reveals a band grappling with a thorny mix of electronics, rock squall, and free jazz energy. Alto sax/electronics player Petter Frost Fadnes, guitarist/ electronics player Chris Sharkey, and drummer Stale Birkeland dive head-first into dense walls of sound, jumping from skirling blasts to shuddering scrims with fervent abandon. With heavy use of electronic processing, it becomes just about impossible to tell where the abraded textures and mercurial washes of sound are coming from; where distorted sax lines end and where shredded and processed guitar playing picks up. The result is a blustery gale churning over the metallic clanging of percussion and caterwauling energy of thundering drums. That is not to say that the improvisations run full-tilt throughout. Instead, the set flows from piece to piece, shifting densities and velocity along the way. They are just as comfortable laying out seething free-form soundscapes as they are charging through funk-inflected skronk. Hanging guitar chords ring through over glitched static and echoed loops, but then just as suddenly, they can veer off into flayed all-out noise. The three have already started to make a stir as part of the improvised music scene in Leeds where they crossed paths with producer Simon Fell. This release should connect them with listeners with open ears." Michael Rosenstein SIGNAL TO NOISE

"Unusual album - succinct free drumming, highly unconventional sax (processed to almost unnoticeable), wild electronics and sometimes almost spacey prog guitar indicating the broad scope and cross-channel culture clash for the most of this album which is one of its strengths. Highly experimental but rocky, noisy and out-there enough to be exhilarating as well as engaging. It has its introspective and mellow parts but that art-ness remains, especially on Keegan. Track 4 Gascoigne certainly peaks a schizoid vein with some fantastically energetic, rolling, free drumming, super fast jazzy electric guitar but Fadnes sits in the background making sounds like a dying whale (hang on, Gazza's well-publicised breakdown took place since this release...) oh well, it's a brilliant piece anyway. Shearer is my favourite with all three demonstrating some awesome rolls, licks, flicks whatever in a frenetic head to head which almost sounds speeded up it's so sharp and alive; an almost cocaine-overdose at 150mph (I'm trying to get the image of Shearer speeding towards the goal out of my head here, give us a chance)." FREENOISE