The Society Of The Spectacle 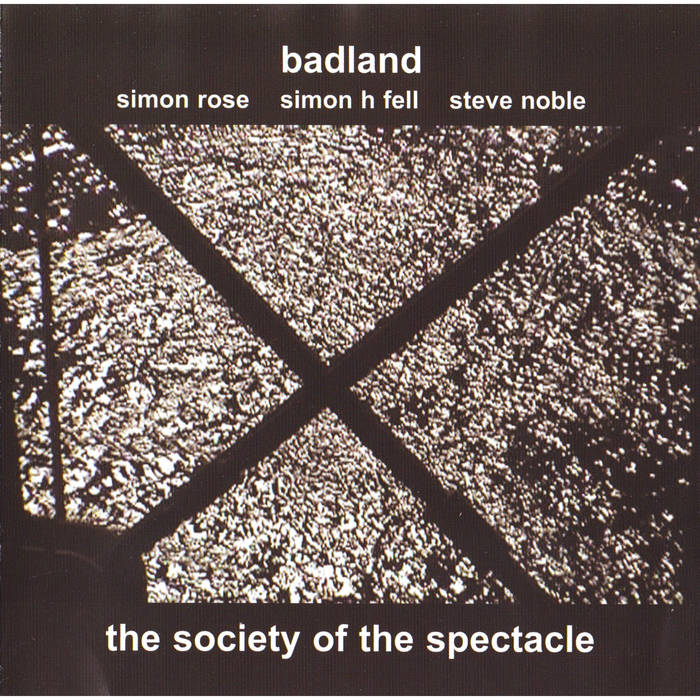 Badland's third album takes them into new, more abstract territory. The heavy blowing is still there, but mixed with a crispness and rapid flexibility that heralds a new era.

"Badland play a sequence of extended improvisations ranging from controlled passages to full-blown, goddam uncontrollable music where the single elements fuse in lawless blasts of extracurricular instrumental possibilities. Adjectives like "elegant" or "subliminal" are pretty much banned from Badland's idiom; Rose exhalts harmonics and ferocious intentions through his howling phrasing, which often has the flavour of conscious desperation; in his thoroughly detached seriousness, Fell is nevertheless able to bomb our chest with low-end grenades, showing his most radical face while never losing composure. Noble's surprising figurations gain muscle thanks to a precise choice of colours from his set, which he uses like a super-glue to individuate transitions and solo spots as parts of a giant mosaic whose nuances come from the artists' essence more than their instruments. This is difficult, fervent music that burns quickly." [Massimo Ricci TOUCHING EXTREMES]

"After a brief dearth of new releases to savor, one of Britain's most uncompromising musicians and original thinkers, bassist/composer Simon H. Fell, is presently the centerpiece of a wealth of several noteworthy aural documents. Not only has his large ensemble work, like his massive "fourth stream" project Composition No. 62, seen the light of day, as well as work with the London Improvisers Orchestra, but also other interesting groups, such as a cooperative quartet with clarinetist Alex Ward, keyboardist Luke Barlow, and percussionist Steve Noble (Help Point) and the last installment with Fell's spellbinding quartet (Four Compositions), have kept interested ears busy. With The Society of the Spectacle Badland move slightly away from the heady racketeering of their previous releases and toward a balance that includes a focus on sound shaping/abstract terrains. Don't worry, though, there is plenty of fire-breathing, should that be your desire. The opening track Kittiwake is a perfect intro to the group's more introspective approach, with ghostly worlds coaxed by Noble and Fell's scrapings and Rose's fluttering alto as the reserved intensity simmers. Next, Elka is a percussive intro that yields to windswept whispers, a terrain also explored on the dark spaciousness of Nissa. As for the ripping shockwaves this trio is capable of producing, the two parts of The Society Of The Spectacle provide plenty of rough-hewn quasi-anarchy, with the rush of Noble's drums and, most potently, Fell's dancing pizzicato work. It is Fell that inspires the trio's most frenzied work, particularly Rose's sound ribbons and overblown fire. Neither track is to be missed. The final three cuts also follow in the path of their textural predecessors with an inspired righteousness. Mia, for example, follows up on the rush of the Society pieces, with Fell's powerful bass and Noble's bombastic tom work inspiring Rose's raspy sound torrents; and Snipe is another over the top performance that concludes interestingly with creative soundworks. Finally, Rose makes Reeds In The Western World his own with a more than four-minute solo performance that highlights his technical range as his partners join in for a final sound salvo that touches briefly on swing (!). Filled with plenty of full-tilt improv as well as the potency (and beauty) of restraint, Badland is proving to be a hell of a trio. This is arguably the group's strongest work yet and surely a calling card for its members' seamless intercommunicative abilities." [Jay Collins ONE FINAL NOTE]

"Steve Reich fashioned a composition out of the proverbial aphorism, "How small a thought it takes to fill a whole life". Badland put the axiom into public practice, evoking an entire connectivity of histories with a single gesture that is itself only a fragment of a monstrously diverse unfolding. The trio's newest offering is concentrated and expansive, tipping the nod to multiple influences with a series of microhistorical moments that still exude unified individuality. No proof is necessary beyond the opening moments of Part One of the title track, sequenced, Boulez style, after Part Two. The "classical" connection is appropriate, as the patterns with which percussionist Steve Noble opens the proceedings are focused, loosely proportional and juxtaposed with authoritative silences in the manner of Varese or even of Zappa; a vague Orientalism deepens the illusory mystique of early 20th century panglobalism. A reflective silence ensues, only to be shattered, irreparably, by a jump-cut into some uhr-swing, implied but never completed by a quasi-rhetorical pattern on ride; bassist Simon Fell doesn't exactly walk, but his rhythmic spikes belie deep listening and the half-homage of improvisational camaraderie. Simon Rose breathes Ayleresque fire through a saxophone soaked, but not drowning, in vibrato and collective musical recollection. The slow build to fury is one of the things for which Badland has been justly praised, and Part Two of the title track rumbles and rises to a brilliant frenzy. More then anything though, Society of the Spectacle exudes luminous silence, huge vistas of space through which structures appear and submerge. Reeds in the Western World, a stunning vehicle for Rose, begins with such vast plains of no-sound. Rose is panned to the right, so that even when his Coltranesque utterances begin to shrill, blat and growl, silence hovers expectantly in the wings, only to be completely dispelled when Fell and Noble kick in, jazz style, at the zenith of Rose's solo. This disc is the most satisfying Badland offering so far, both for the excellence and commitment in the playing and for the freshness with which each moment moves to the next. Sixty-six minutes flew by, and I'm eagerly awaiting more entries in this trio's brief discography." [Marc Medwin DUSTED]

"There are few musicians whose work spans as broad a range as Simon Fell. As composer, improviser, and accomplished bass player, Fell's restless creativity consistently shines through in a mind-boggling range of contexts. What is astonishing, though, is how he manages to pull all of his various interests together into an overarching vision, whether developing settings that synthesize composition and improvisation for both large ensembles and small units; using the studio to "recompose" densely orchestrated improvisations; pushing at the edges of acoustic "ghost notes" with the trio IST; or diving in to skirling free improvisations. Fell, alto player Simon Rose, and Mark Sanders formed the group Badland in 1994 to explore "free jazz and the reinterpretation of elements of the modern jazz repertoire". Steve Noble moved in to the drum seat in '98 and has remained ever since. This is now one of Fell's longest running groups and it's intriguing to track the trio's trajectory over their decade-long existence. Their eponymous first release took off from roots in free jazz, playing blistering muscularity against starker areas of collective freedom with originals as well as pieces by Ellington and Ornette Coleman. (Their reading of Ellington's Come Sunday is a model of sensitive abstraction.) Axis Of Cavity, their second release, still retains the molten energy of the first, but now even the most caterwauling of the collective explorations are opened up with a charged sense of group dynamics. The recent Emanem release, The Society Of The Spectacle, from April of 2003 opens things up even further. The first two pieces are studies in controlled refinement. Pinpoint percussion, looping alto lines shaded with burred overtones, and scumbled arco are pushed to a simmer; ready to boil over at any minute, yet held right at that edge. The trio toys with conventions of the sax, bass, drums format as, for instance, the patterns of Rose's circularly breathed lines propel the music along rather than drums or bass. On the two-part title piece The Society Of The Spectacle, the surging Mia, or the searing intensity of the closing Reeds in the Western World, the three drive the improvisations along with arresting sheets of energy. Noble is in his element, prodding at the flow of the pieces, whether diving in with a well placed snap or crash or thundering along with an elastic sense of momentum. Fell seems to revel in this setting where, like his trios with drummer Paul Hession, he gets to flex within the context of explosive group playing. Even here, though, his keen ear toward careful placement and balance of timbres and density comes through. Rose's playing comes off particularly well. (It's a wonder that his recorded output, as far as I can tell, is restricted to the three Badland releases.) Here is a player who has absorbed the extended reed techniques of free improvisation, and channeled those rippling waves into a focused approach to phrasing and pacing that never falls in to showcasing or bluster. The liner notes mention that the trio did their third tour of England in September of 2005. Let's hope that results in their first live recording." [Michael Rosenstein SIGNAL TO NOISE]

"Splendidly moody, often quite aggressive stuff from a trio that's just celebrated its tenth year of existence, which strikes me as yet another of those unwelcome where-did-the-time-go moments that mark the critic's descent into old fartitude. Fortunately, the passing of a decade seems to have had exactly the opposite effect on this particular grouping of musicians, whose work seems to have undergone several stages of fermentation to arrive at this highly concentrated and heavily fortified result. This is improvised music at its most tensile, with the emphasis being on music (rather than sonic art or degenerate sound effects) as much as on improvisation; Rose's booklet notes imply a frame of reference which incorporates both free jazz and free-but-not-jazz, and he's damn right. Quite apart from that, I'm always in favour of anyone who sticks up for the improvisational usefulness of the sniping, whinging alto sax as opposed to its nearest relatives. I also like strident, close-captured arco bass and percussion which is played rather than flailed at. All in all, then, I'm doing well here; as a free player Noble is possibly the only drummer of his generation to underpin his exploratory approach with the kind of fearsome chopsiness I associate with Tony Oxley. To be bought at once, then played loudly and very often." [Roger Thomas JAZZ REVIEW]

to see full press quotes/reviews for this album, visit www.brucesfingers.co.uk/catalogue/emanem4120reviews.htm