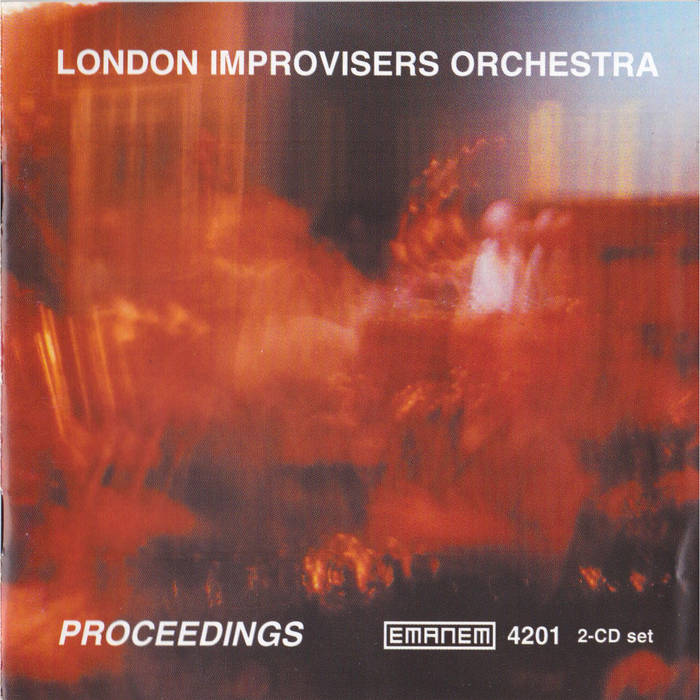 The London Improvisers Orchestra is pretty much what it says - at least a partial who's who of London Improv. This studio recording includes free improvisations, pieces conducted by Steve Beresford, Evan Parker & Dave Tucker, and compositions for improvisers by Caroline Kraabel, Phil Wachsmann, Rhodri Davies, Chris Burn, Adam Bohman & Simon Fell (his Composition No. 46 - Ellington 100 (Strayhorn 85))

"An improvising ensemble of this size necessitates special requirements among the participants - the kind of careful listening and interactive response for which British free improvisers are known. The pair of completely ad hoc performances here illustrate this, and suggest a true 'concerto for orchestra', where the details of design and direction are left solely to the spontaneous decisions of the participants. Each of the remaining pieces is shaped in some part by the personality of the conductor(s) and the distinct strategies they employ. The instrumental vocabulary used by the participants includes extended sonorities, rootless free-jazz phrasing, and concise New Music intervallic relationships - sometimes all at the same time. The effect can be quite like some of Ligeti's or Xenakis' more adventurous, complex scores - a blur of merging sound masses; brief, violent explosions and then a sorting-out of sonic debris; sparse, pointillist colours; an exhilarating if indiscernible Tower of Babel. Such music may be an acquired taste. The point is, these musicians are participating in important and exciting activities, making discoveries and creating music that otherwise could not exist, and cannot be re-created. They're keeping the 'new' in New Music alive." Art Lange FANFARE

"Concerto for Alan Tomlinson opens disc 1 with brio, the orchestra providing a perfect backdrop for the trombonist to shine. Dave Tucker's leading of Monster's Milk must also be mentioned for the richness in the constrasts he can get out of the orchestra. Disc 2 contains shorter (seven, none breaking the 12-minute threshold) and conceptualized tracks. Caroline Kraabel's Virus has the orchestra acting as a living organism in which a virus infects one organ after the other - a very good idea that translates almost graphically in the music. Simon H. Fell's Ellington 100 (Strayhorn 85) is the most written piece, taking 100 beats from an Ellington-Strayhorn ballad and stretching them on 10 minutes. The result is stunning. Also worth of note are Notes for Terry Day, a piece giving room to Day's bamboo pipes (Day was a percussionist until a degenerative disease forced him to quit; the Orchestra is his first musical venture out of percussion); Burn's The Barn makes use of various subsections of the orchestra in duets and trios; Wachsmann's Changing Places splits the orchestra in four sections, each with it's own conductor! Sound quality is impeccable. A 24-page booklet gives much details on the orchestra and the pieces performed. On Proceedings, the listener is invited to discover the scope and the richness of the possibilities a large-scale orchestra can offer in an improvisational context. The broad palette covered here in terms of sound, dynamics and contrasts eliminates any chance of monotony. This record is firm statement that the London improv scene alive and kicking and still has plenty to say. A must. Very strongly recommended. **** " François Couture DELIRE ACTUEL

"This conglomeration of London-based musicians is a free improvisation lover's delight. Boasting talent galore from saxophonists Evan Parker, Lol Coxhill, and John Butcher to violist Philipp Wachsmann, bassist Simon Fell, trumpeter/pianist Chris Burn, and trombonist Alan Tomlinson, the more than thirty performers appearing on this double CD push the outer edges of chaotic interplay. Performing ten "compositions" and two completely improvised pieces, there is a complete abandonment of anything approaching melody. While the usual signposts of listening experience may not be familiar, the results speak for themselves with stunning cacophony, wild individual ad group solos, and the sort of extreme game playing that makes John Zorn seem tame." Steven Loewy ALL MUSIC GUIDE

"The beauty of this project is illuminated by the collective free improvisation Proceeding 1, a minimalist ensemble dirge that builds into a microtonal crescendo as elongated lines overlap to sustain an intensifying organic structure of anarchic lyrical cells. The London Improvisers Orchestra proves that it is possible to expand the radical techniques of pioneers like Derek Bailey and Evan Parker and sustain them on a communal scale, a fantastic achievement that vindicates Charlie Parker's desire to have Edgard Varese design an orchestral score for him fifty years ago. Proceedings is a contemporary creative masterpiece . . . the life journey that brings me to appreciate the significance of the London Improvisers Orchestra involves an ongoing learning curve that numbers among the most vital and rewarding dimensions of my aesthetic experience." David Lewis CODA

"A wide-ranging and impressive debut. The first disc quickly demonstrates that LIO's playing in two group improvisations (massed droning tides of chopping, squeaking, sawing sound which rise and fall with a slow but powerful pulse, inexorably building into massive crescendos) and three conductions is by and large less formal and noticeably more playful than Butch Morris's slightly arch constructions. Steve Beresford's spiky 'concerto' showcases the antics of maverick trombonist Alan Tomlinson; Evan Parker's conduction sees Kaffe Matthews' sampler taking on the orchestra's collective might. The nebulous conception of Caroline Kraabel's Virus, an envisaging of the players as an organism and the (two) conductors as regulating organs, with the players instructed "not to consciously choose what to play but just to let the simplest sound happen in response to the conducting" gives rise to a startlingly organic and unpredictable momentum of playing; Ellington 100 (Strayhorn 85), Simon Fell's elegy for the great band-leader, is re-presented in all its lilting nostalgia; Phil Wachsmann's Changing Places Summer 99 divides the orchestra into four sections, each with a different conductor, all overseen by a fifth, leading to clashing, crashing flourishes; Kraabel's Notes For Terry Day assigns each player one note, which they are entitled to either play or not play, with London improv vet Day soloing on bamboo pipes on top of them. The following two conductions limit themselves in their deployment of the orchestra's resources: Rhodri Davies's Wstrws, originally composed for IST, is a spacious, spare graphic score which sets two trumpets against a carefully considered succession of instruments; Chris Burn's The Barn comprises a series of duos and trios of predetermined length, methodically working its way through the available musicians. Proceedings concludes with Adam Bohman's Press Summary, in which the musicians interpret by reading aloud or playing in response to edited press releases from Bohman's work place, resulting in a babbling tapestry of instrumental hubbub and random vocal interjections. The playing is of a high standard throughout, and considered together, these conductions make for a commendably thorough exploration of the orchestra's not inconsiderable range and resources. For those not fortunate enough to have monthly access to large group playing of this quality, Proceedings is an essential purchase." Nick Cain OPPROBRIUM

to read more reviews of this recording, click here: www.brucesfingers.co.uk/catalogue/emanem4201reviews.html