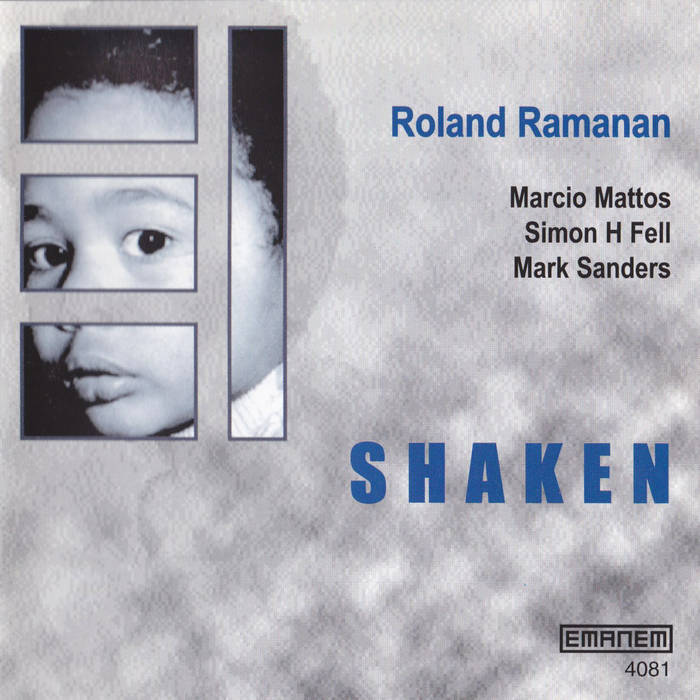 "There's a revelation here. I just had read the name of Ramanan as reviewer on The Wire magazine but never heard him playing before. Shaken is his first CD under his own name and, in my opinion, a very good debut. Gathering two/three definite influences in his trumpet style and giving a well indicated direction to his way of composing, Roland leads the quartet to territories ranging from the almost 'detached' free playing of various European jazz projects to forms of invocation that call for attentive concentration, from players and listeners alike, particularly during the wonderful bits in which Ramanan takes his wooden flutes in a prominent role. This music has a character of extreme elegance linked with passion and suffering, like a stairway to a better life after a road full of obstacles. Marcio Mattos and Simon Fell's strings add the gift of extremely beautiful drones and sounds that help this project's walking, together with the ever-evolving rhythmic developments of Mark Sanders. Must be listened many times to fully appreciate it: Shaken is the promise of a growing new talent." Massimo Ricci TOUCHING EXTREMES

"This album may be Ramanan's first under his own name, but he was already an experienced player with solid jazz and improv backgrounds. For the most part, Shaken consists of a free jazz venture. Ramanan devised most of the pieces, providing structures, ground rules, occasionally heads or other bits of written-down passages. His playing extends Don Cherry's explorations, tapping into the atavistic soul of the human kind yet, despite the free improv setting, swinging, remorselessly and irresistibly swinging. Sanders answers that call by riding the cymbal more than usual. Mattos and Fell keep the music floating at more abstract altitudes and the light tension between these two poles are what keeps these pieces lively and on the edge. The blow-out Break and the slow, pensive Before stand out, but overall Shaken makes a very convincing debut." François Couture ALL-MUSIC GUIDE

"Both the album title and the voluminous, chatty and (unnecessarily) self-deprecating liner notes remind us that Roland Ramanan is the son of the late Ellsworth "Shake" Keane, trumpeter on Joe Harriott's legendary 1960s albums, and that despite studies with John Stevens and stints with the London Improvisers Orchestra, Ramanan's jazz background is ever to the fore on this, perhaps the most "jazzy" Emanem release in recent months. Only four of its ten tracks were "entirely improvised"; the others were conceived - as opposed to composed - by Ramanan before and during two studio sessions in September 2002 for which the 36 year old trumpeter gathered an impressive group: cellist Marcio Mattos, drummer Mark Sanders and bassist Simon Fell (who positively revels in the compositional stratagems used in pieces like Showers). Ramanan's fragile upper register and occasional use of wooden flutes recalls Don Cherry, and Sanders swings along busily on the opening Before, rides the cymbals like Jon Christensen on Promised and adds some nifty brushwork on the final Forgotten, which the trumpeter unashamedly describes as a ballad. Of Break, he writes: "To cut loose and really blow out is often considered primitive and uncouth within the ego-less, collective world of improvised music" and then goes right ahead and does it (that's jazz..). Shaken is an impressive debut album and one his dad could feel mighty proud of." Dan Warburton PARIS TRANSATLANTIC

"A plangent, rather melancholy trumpet tone out of Miles Davis and a varied set of compositions make for an engrossing disc." Andy Hamilton THE WIRE

"Trumpeter Roland Ramanan makes an impressive debut on Shaken, featuring an invigorating supporting cast. Ramanan rises to the high level of his cohorts in a variety of settings, guided by his enticing, poignant conceptions that not only emphasize five quartet compositions, but also the splintering of the group into smaller duet or trio pairings. The terrain covers the exotic (Before), the meditative (Forgotten), the minimalist (Showers and The That's That), freely improvised excursions (The Next and Worth Remembering) and stirring drama (Break). While all musicians play at an advanced level, Fell and Mattos interactions are electric, particularly when they pick up their arcos. As expected, Sanders is at his creative and imaginative best. This is a vibrant session that documents another talent from the fertile London new music scene." Jay Collins CADENCE

"Ramanan's playing has an open, expressive plangency about it: sometimes he retreats into squirrelly mutterings, but more often than not he suggests a British extension of Leo Smith's clarion sound. That said, the other three constructively confound him a lot of the way, and the result is free jazz of a combative yet peculiarly lyrical bent, beautifully sustained across a long CD." Richard Cook BBC MUSIC MAGAZINE

"Here we have ten quartet pieces with Roland Ramanan playing the trumpet and wooden flutes over the incredible rhythm section of Simon Fell on double bass and Mark Sanders on percussion. Here we have multiple instrumental lines connecting one with each other, clashing and combining interesting sounds. There are some elements of free jazz on this recording, specially on some passages in Before that have that swinging quality. It is amazing how well Fell and Sanders interact developing a basis for Ramanan's trumpet and flute lines while at the same time experimenting with new sounds and tempo changes. This CD will surely be loved by lovers of improvisation and it is also a good bridge for those that are accustomed to standard jazz and want to explore the paths of spontaneous music." MUSIC EXTREME

"Wonderful ... they captivated the Freedom Of The City 2003 audience with a fantastic set. Shaken is a great album, well worth getting your hands on." Jez Nelson JAZZ ON 3; BBC RADIO 3

"In the sleevenotes, Roland Ramanan says he isn't the trumpeter his father was (the great Shake Keane), but he achieves something here not every virtuoso manages - a poignant and telling album. Ramanan plays an array of wooden flutes as well as his main horn, and conjures heady atmospherics from his excellent accompanists. Ramanan feels comfortable in the jazzoid world music discovered by Chicago players in the 1960s, and Ian Smith's production balances warmth (Sanders' evocative toms) and detail (Mattos' skittering bow work). There are composed pieces and group improvisations, but the album works because it's Ramanan's. Lyricism and open-eared enthusiasm with admirable directness. A:1" Ben Watson HIFI NEWS

"One track that's welcome for its inclusion, is literally called Worth Remembering. Highlighting a meeting of comparable musical minds, the piece starts with expertly vocalized brassy smears and stresses that meld with solid back up from the plucked cello. Purring brass trills then set up the momentum that welcomes the bass and drums playing an advanced version of jazz time. Soon buzzed rubato output from Ramanan meets long-lined string accompaniment that moves from pizz to arco and back again in split seconds. Finally after he searches his embouchure for le note juste, the brassman ends with high-in-the-valves note scraping mirrored by scratched bird-like whistles from the cello. The triumph here is that it's often difficult to tell which note arises from the string set and which from the brass bell. Like Mikes Davis in the mid-1970s Ramanan holds onto his grace notes as the accompanying undertow from the others becomes wider and more diffuse -- Fell drones out the continuum as electronics apparently extend Mattos' cello tone. Experienced in group situations such as pianist Chris Burn's Ensemble and drummer Eddie Prévost's quartet, the cellist easily adapts to the unpretentious, jazz-like beat from Sanders, speedily triple-stopping and sounding out short, melodic fills. The trumpeter responds in kind, letting himself go by arching out a brazen, high-pitched solo that includes a screaming, descending pitchslide. There's no egg shell walking here. On this and other pieces, Ramanan offers up matchless open horned tones, while the others construct irregular pulses around him. Elsewhere his idea pool includes fluttering rubato lines, strangled cries, mouthpiece French kisses and extended Harmon muted tones doubled with arco bass color." Ken Waxman JAZZWORD