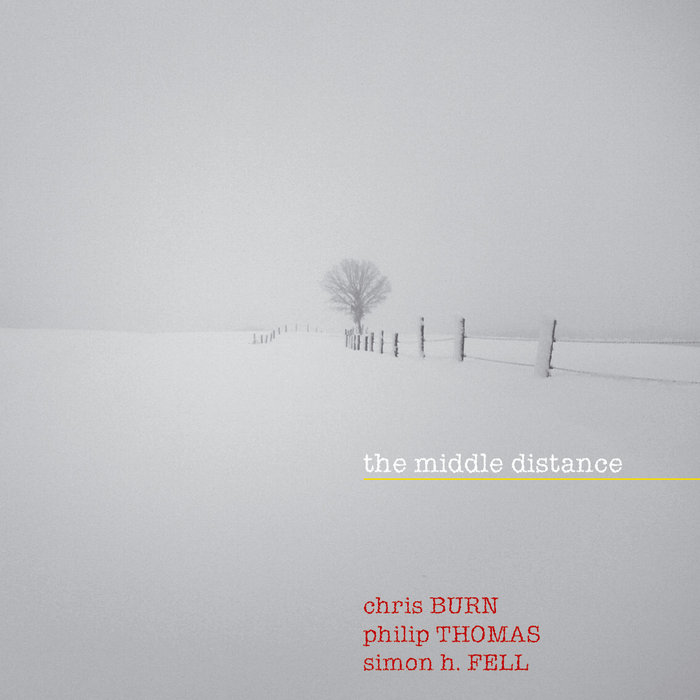 Quite simply, one of the best improvised music CDs to appear on the BF site for many years. Wonderful playing, superb recording quality, and an inspired day's music-making. Not to be missed.

"The Middle Distance draws on a bountiful reservoir of experimental histories. Thomas is known for his performances of Cage and 'complexity' composers like Michael Finnissy; in 1993 Burn issued a disc of piano music by pioneering American composer Henry Cowell, although his interest in composed means has been overshadowed by his reputation as an improvisor. Thomas, playing prepared piano, remains sonically distinct from Burn, but the music manages a noticeably unified soundworld. Fell leaves conventional bass rhetoric far behind as the musicians consciously match up their timbres; at 2'55" on track four, their extended techniques flow into a microtonal patois that trashes instrumental allegiance." Philip Clark THE WIRE

"From the start of the first track Looking Ahead, Seeing Nothing (an allusion to the uncertainty of improv?) the music is put together like some kind of finely crafted filigree sculpture, tense, full of anticipation and edgy precipices hanging over moments of silence. The interplay between the musicians is outstanding, there are three exceptional set of ears here, and the many years experience they share in the music is clear right from the outset. There is a chamber music feel to the recording, which is wonderfully captured in the resonant space that is the St Paul's building at Huddersfield University. Everything is played entirely acoustically, and so we have the sound of a lot of strings here, struck, rubbed, bowed and hammered, combining wonderfully to create little sections of finely balanced sounds, some short some long, some tonal some percussive. It all just works so well. The second piece, a gradual, episodic thirteen minute study called Not With The Fire In Me Now sounds almost composed, and given that all three musicians have worked with compositional structures quite often in the past maybe this isn't such a crazy idea, but whether there is any preordained structure to the music or not it is clear that improvisation is at the heart of every one of the pieces here. I love to hear piano played in improvised music like this, and Fell is such an able and versatile bassist that he finds a multitude of ways to wrap around the mix of scrapes and chimes from the pianists. The sense of shape and balance in the music is what really makes it for me. Nothing is overdone, bold statements are made when they are needed and there isn't a fight to be heard. the musicians are working here to form a music together. This is just a great recording. A wonderful fifty plus minutes of finely crafted improvisation. The opening passage of the final Looking Back, Remembering Little is just great, a thunderous blend of pummeling deep piano booms matched by a heavy metal approach to bowed bass, in places almost reminding me of a more abstract Hendrix workout. Just as the opening is so powerfully direct, so the sections that follow are elegantly gentle, so underlining the varied nature of the music. I thoroughly recommend this album to anyone that enjoys improvised music of any kind. My favourite improv disc of the year so far." Richard Pinnell THE WATCHFUL EAR

"What is particularly delightful is the way that the three interact. If two pianos usually suggest a degree of bombast, then Burn and Thomas are the antithesis of the typical. Each works with meditative discretion, a scattering of notes here, a sudden gesture to the interior there. Fell's sense of line and pitch inflection make him an ideal (and equal) partner and the pianos are redefined in terms of timbral possibility rather than the usual density of harmony, line and event. The performance might serve as a model for the piano in small group free improvisation." Stuart Broomer POINT OF DEPARTURE

"While all of these albums (the Another Timbre piano series) are musical, The Middle Distance is the most musicianly. Chris Burn plays directly on his piano's strings, Philip Thomas modifies his; noted double bassist Simon Fell doesn't touch a piano at all, although he's done so elsewhere in his discography. The pianists each get one side of the stereo spectrum, but even if they didn't it would not be hard to tell them apart. Although not totally allergic to touching the keys, Burn often uses the piano as a long stringed instrument, a harp or zither. Thomas's modifications often turn his instrument into a percussion ensemble that happens to emit the odd key-strike. Fell wrenches cavernous groans and sprung wire sonorities from his bass. But more than the sounds, it's how they find a fit together, break what they've found, and reassemble it that is the point. In other words, it's all about interaction; you could, in the kindest and most appreciative way, call it good old-fashioned free improv." Bill Meyer SIGNAL TO NOISE

"The interaction is subtle and complex, and the listening - ours and theirs - is tense and intense. There's no need to fly off the handle and smash the ball out of the court (come to think of it, chess might be a better metaphor than tennis): restraint is the name of the game. And despite the considerable timbral intricacy of the preparations, there's a keen ear for pitch at work throughout, best appreciated on the ebullient centrepiece of the disc, All Moved. One wonders whether the album's five tracks haven't been sequenced deliberately to form one of Bela Bartók's beloved arch forms (a central scherzo bookended by slow movements bookended by outer movements recalls the Hungarian's celebrated String Quartet No. 5) - this, and the track titles' references to Samuel Beckett's Krapp's Last Tape, is further evidence of the musicians' breadth of knowledge and deep engagement with several parallel traditions of musical thought and practice. It all adds up to a truly outstanding album, one that any self-respecting fan of new music in whatever form can't afford to be without." Dan Warburton PARIS TRANSATLANTIC

"Restrained, yet also enlivened by the stops, slaps and clinks from Philip Thomas' prepared piano, the five instant compositions on The Middle Distance also draw on the participants' experience in notated and improvised music. On this CD Fell is as much a musical collaborator as the two pianists - especially at those junctures where his pulsated pops, reverberating thumps and sul ponticello slices appear to mirror - or is it vice versa - the taut rubber-band like thwacks and knife-plucking-like scrapes from Thomas' instrument. As those two vie to destabilize the sound field with angular pacing, Burn does his part with rubato patterns and voicing which emphasize the piano's accepted versatility. At points he stomps out thick rumbles with the pedals; at others exposes swift kinetic runs from the keyboard; and at other junctures posits full-fledged arpeggios. Should Fell advance the polyphonic themes with triple-stopping or scrubbed bow bouncing; or Thomas slap the objects resting on the prepared strings to create high-pitched harpsichord-like reverb or node extensions; Burn has an appropriate response. Rumbling low notes at one end of the keyboard, or simple clamorous textures from the other add a staccato urgency to simplistic "Chop Sticks"-like clinks. Overall, his sequences flow sympathetically and nestle harmonically among the others' physical gestures." Ken Waxman JAZZ WORD

"The Middle Distance is an intriguing proposition in terms of orchestration. Two pianos and a double bass warrant a definite shift of the timbral balance towards the low frequency region, a zone that is perhaps more conductive than anything else as far as concealed transmissions to the psyche of a listener are concerned. Furthermore, the indecision between insecurity and protection - a feeling occasionally elicited by the authority of bigger instruments - should definitely be considered whenever the circumstances drive a sonority down where the heartbeat tends to decelerate. Burn, Thomas and Fell discard large chunks of the above theory, though. They do employ what's necessary to let us not forget about the ideal range of execution of their tools. Engrossing snapshots of burly reverberation from the viscera of the pianos, mixed with Fell's remarkably unyielding performance, really give the idea of an instant cathedral being edified upon our heads. However, the trio manages to occupy different spaces: non-invasive preparations, together with a lucid use of the instrumental extremities, often counterbalance the subsonic impetus in interesting fashion. Not With The Fire In Me Now presents a series of illustrations in which the interplay flies at impressive altitudes; a research on combined techniques producing stunning effects. We remain astounded by the vastness of the resonant architecture. There's also something for those who crave pure improvisational creativity: All Moved is a startlingly dynamic offer that juxtaposes articulated neatness, harmonic enigmas and nervous figurations executed with fervid meticulousness. Never Knew Such Silence drops brief contrapuntal suggestions in an amalgamation of likelihood and edgy vigilance. Thanks to the visions of three musicians able to reach climaxes of uncontaminated imagination, we can stuff rational and technical roundabouts away, ultimately letting the music speak for itself. And speak it does, strong and clear." Massimo Ricci TOUCHING EXTREMES

“Hard to imagine the Furtive 50 that didn't have a Simon Fell record hovering somewhere in its loftier echelons: hard to imagine and foolish to try. In another superb year for Simon Reynell's enterprising and imaginative Another Timbre label, any one of at least half a dozen discs could fairly have been included in this list but in the end the name in the gold envelope is The Middle Distance, from the label's clutch of piano-centric releases at the top of the year. Ladies and gentlemen, on your left you will hear the dependably brilliant Chris Burn, who has long been a crucial figure in the landscape in which I attempt to orient myself (I'll give you a clue, it looks a bit like the cover of the album); to your right, Philip Thomas, whose work I know less well, something I'll obviously have to rectify. Thomas's piano is flagged as "prepared" but Burn's close and not-unboffiny attention to techniques of extension and modification in improvisation means neither of them exactly brings the plangent tones of a Richard Clayderman to proceedings. Fell, at the centre of the sound image but seldom one to 'hold' a centre in the anchoring way you might associate with improvising bassists (unless you can get anchors with helium in), is as acutely mobile and suggestive as ever. What the trio describes is an abstract field teeming with life, even at its most reverberantly quiet; full of micro-encounters and blink-sized incidents, so carefully planned in the moment of their execution and so imaginatively heard in the same moment by the three musicians that you might understandably over-credit serendipity for the incredible effects of these intelligences at work. A record I can't imagine ever becoming familiar: quite possibly the reverse.” Chris Goode THOMPSON’S BANK OF COMMUNICABLE DESIRE