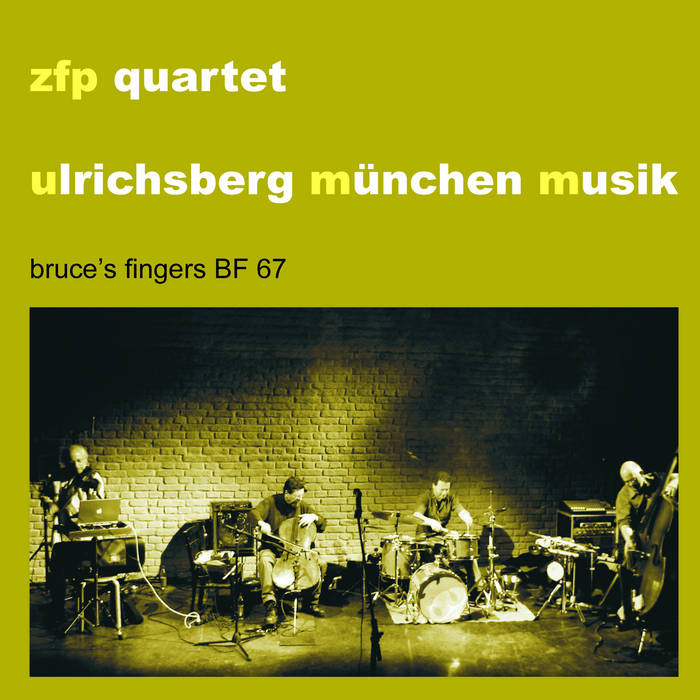 The ZFP Quartet's second album captures their live performance from the Ulrichsberger Kaleidophon 2006, plus an excerpt from a Munich performance two days later. Improvised music of a quite extraordinary sophistication and richness.

"When lengthy abstract improvisations leave you no escape, then something really is happening. This is what happened to me when listening to the first improvisation that takes about 34 minutes. What a superb music! Group improvisation of a very high standard. The musicians know how to develop an improvisation and remain focused all through this journey. As in the other pieces they excel in some very concentrated improvisations of a very warm and deeply human nature. Their atmospheric music is very delicate and well-balanced. A full-grown work of four very communicative improvisors. A very rewarding and joyful experience!"
Dolf Mulder VITAL WEEKLY

""Improvised music of a quite extraordinary sophistication and richness", recites the press release. Indeed it's not easy to better synthesize what's heard in this disc, which contains tracks from two different Austrian/German concerts in 2006 by the quartet. The first and longest piece is a delightful mixture of refinement and vigour, at times recalling the work of Mersault during the most growling'n'droning sections - mostly courtesy of Fell's powerful arco swings - but with a larger dose of unpredictable shifting towards disorder, made easier by the electronic dressing characterizing Zingaro and Mattos' constant search for an off-the-border dialogue. Sanders, a sensitive percussionist under any circumstance, listens to the happening with intense respect and attention, ready to install floriferous bursts or soft caresses whenever the occasion arises. Jaunty four-way conversations, obscure evocations and indescribable overlapping of instrumental parts constitute a difficult crossword to solve, yet ZFP's style is immediately visible and, should we feel the need to eviscerate the single components, several individual listening keys become progressively available to get better acquainted with the quartet's impressive attitude. The München track represents the mystery touch of the album, and it probably reaches the highest points of "beauty" - if this still means something - with a series of hazy curtains and string-based uncertainties rapidly branching out in an almost scary, pre-explosive state that can't be linked to anything even remotely similar. The final segment brings us back to a more concrete difference between spirit and flesh with a slight advantage for the latter, short durations and sudden alterations of the overall mood turning on the stroboscopic lights of a post-Schönberg nightmare that could tear an average modern music ensemble into shreds of toilet paper."
Massimo Ricci TOUCHING EXTREMES

"Where ZFP's first release was a punningly titled reimagination of several key strands of twentieth century chamber music - from Bartok to Scelsi to Xenakis - this live recording occupies that ground comfortably while leaning outward to survey more recognizable forms of free improvisation. It's the kind of synthesis at which Fell has always excelled, and which he - this is the most difficult and admirable part - has made sound natural and wholly convincing. While much of the credit goes to Fell's vision, the group succeeds in no small part due to the vast intelligence and sympathy of the players, and also to the warmth and intensity of the strings, ranging from pin-drop pizzicato to arco openings to the maw of Hell. The styles combine frequently in moments of rich counterpoint, such as those heard frequently in the first improvisation from Ulrichsberg. Sanders is especially restrained here, allowing Mattos and Zingaro to create most of the fireworks, layering the sound rather than inserting punctuations - here Sanders is marvelous, using bells and gentle strokes to integrate his sound with string overtones. The middle piece is a truly haunting performance from München, which sounds like an IST improvisation played through a cranked Fender Twin. The final piece begins rougher, denser, more jagged, but it ends on lovely mutant glissing. Sometimes plodding and plumbing deep, elsewhere light and vivacious, flitting along on the breeze, ZFP's music is compelling from the start."
Jason Bivins SIGNAL TO NOISE

"There are plenty of dangers for the improvising string ensemble - lapses into hyperactivity or extended-technique fussiness - but this CD is a great example of the riches the format can offer. The ZFP Quartet is actually a string trio plus percussion - though Sanders' sensitivity to pitch and texture makes him an equal melodic partner with the other three. ZFP debuted at a Portuguese Jazz festival in 2002, a performance later released on Fell's label Bruce's Fingers as Music for Strings, Percussion & Electronics. The three tracks on Ulrichsberg München Musik come from 2006; the music is more translucent and more dynamically restricted than the previous disc, though there's certainly no drop in intensity. ZFP have a confident, natural sense of pacing, as if they'd set out to explore the neglected zone between the dense, quasi-aleatory busyness of classic free improv and the more calculated slo-mo interplay of e.a.i. It's very orderly music, with a rare sense of additive, organic form that works through countless recyclings and reworkings. A texture is economically sketched-in, developed with momentary luxuriousness, then firmly dismissed; it's answered with contrasting material, then returned to yet again and this time extended into another direction. (It's a refreshing change from the usual run of improv, in which, once an episode is finished, it's never returned to.) The CD contains some of the loveliest pauses in recent improv - discreet yet momentous non-events, as the music touches on silence with the brevity of a gentle squeeze on a bicycle brake. These aren't the ostentatious Cagean gaps that are a favorite trope of e.a.i., but tiny moments of convergence and redispersal, transformative clearings within the musical forest. At times they are like real-time edits - ways of economically bridging two episodes by cutting out all the boring transitional material that tends to crop up in most long-form improv. The lead-off piece - over half an hour long - shows all ZFP's finesse in creating expansive structures that work at the level of micro detail while also giving a larger sense of musical blocks being maneuvered into place. When they finally do do the expected thing and reach a moment of ecstatic climax, it's a kind of graceful structural joke - it's very brief and comes a minute before the track is over. The two shorter tracks that follow are sparser - especially the glimmering dreamscape of München - but no less absorbing. Though the CD's stark title leads you to expect something angular and modernist, Ulrichsberg München Musik turns out to be a small classic of unpretentiously eloquent Free Improvisation. For some reason it was largely overlooked among the crop of 2007 releases, but for my money it's one of the highlights of the past year."
Nate Dorward CADENCE

"Confirms that sophisticated, string compositions are still being crafted - even if the genesis involves instant composition; that profound string-oriented chamber pieces don't have to be limited to the standard quartet instrumentation that has remained unchanged since the 18th century: first and second violin, viola, and cello; and that Zingaro's inventiveness is unfazed by numerous situations. The Lisbon-based fiddler adapts without strain to the presence of unconventional chamber music instruments. Of course the percussive asides from Sanders are rather individual themselves, considering that the drummer usually makes a point finding a place for himself within advanced settings. Furthermore, on Ulrichsberg, the other three players use extended techniques and electronics to expose and alter the tessitura of the strings, exposing partials and overtones as well as the expected timbres and dynamics. That frequently means that wood block pops, resonating configurations of bells and gongs plus cymbal clattering and the gentle patting of stretched skin tops replaces steady beat patterns on the percussionist's part. This dovetails harmonically with the others' output which includes angled spiccato from Zingaro; sul ponticello lines from Mattos and low-pitched slaps and cumulative adagio sweeps from Fell. The resulting striated polytones and abrasive string action provide intermittent thematic alteration to the sometimes chiaroscuro interface. Eventually though, as the strings' timbres veer towards higher pitches and become more fragmented, the bassist's pedal-point stopping leads to a harmonic convergence of four-way, multi-part affiliation."
Ken Waxman JAZZWORD