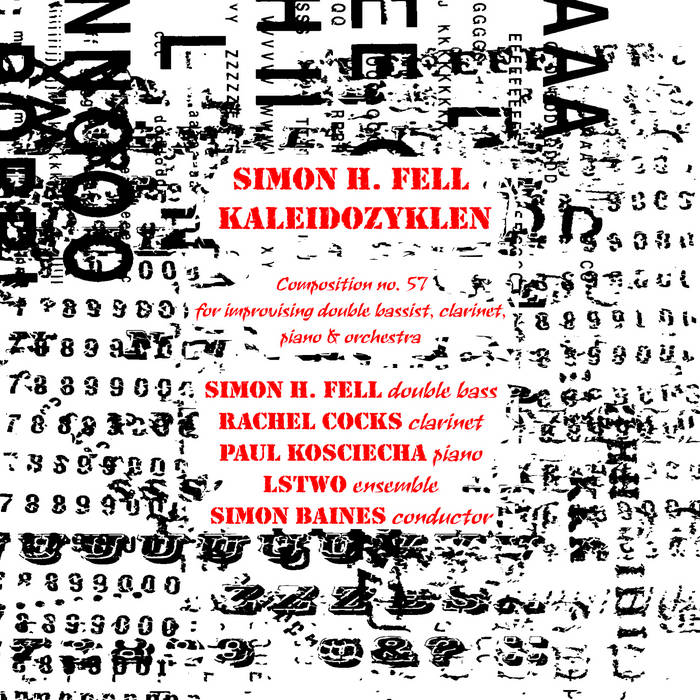 A recording of Fell's 2000 magnum opus, made at the world première in Leeds. A large-scale piece for improvising double bassist, clarinet, piano, 26-piece (classical) orchestra and six conductors, which continues Fell's explorations of ways in which improvisation might revitalise contemporary classical music.

"A 2000 highlight: Simon H. Fell's orchestral swing monster Kaleidozyklen at Leeds University (will some publisher kindly sign this composer before he explodes?)."
Ben Watson THE WIRE

"Simon Fell is a performing musician of the highest order who seeks the bridge the gap that has arisen between contemporary composition and free improvisation. Unlike Braxton, Fell actually knows how to write for the symphony orchestra - his music reveals a knowledge and understanding of Varèse, Birtwistle and Stockhausen. Duration, the work's opening movement - and its longest at 26 minutes - is based on an 88 note series which purposefully sets out to explore extreme registers (to coin the language of set theory, Fell is more interested in exploring p-space than pc-space), contrasting fully-scored material of considerable complexity with passages of raw fury that the composer astutely recognises can only be properly articulated through improvisation. After the seven-minute eerie slow movement Timbre, the work's central pillar, Frequency is a compositional tour de force: the use of multiple conductors recalls not only Stockhausen but also Ives, and Fell's fondness for throwing in quotations from 20th century classics in perfectly in line with the American master's all-inclusive musical vision (though I don't think Ives ever quoted Strauss). (In)articulation is where Fell parts company with the European avant-garde's self-imposed aesthetic purity and throws his hand in with the Americans: he programmed the famous Adagietto from Mahler's Fifth Symphony into music software that scanned the work for minimum accuracy, "correcting" the score into a bland diatonicism worthy of early John Adams or Gavin Bryars. Keeping a foothold in Europe at the same time, this bizarre sub-score is accompanied by tremolo strings working inexorably through a 23-note series. ("I hope you find it as disconcerting as I do," writes Fell.) The final(e) Intensity finds the composer back in the classics, quoting the double bassoon Dies Irae from Adrian Boult's 1968 The Instruments of The Orchestra (a Fell favourite: he already used it back in his Mutual and Reciprocal Ceremonies) to power the music forward to a noisy and thrilling climax. By studiously avoiding the slickness of cut'n'splice postmodernism (compare Fell's work with Zorn's: both express their deep admiration for the contemporary classical and free jazz/improv repertoires, but their compositional approaches are a world apart), Fell doesn't - won't - make things easy for you, but he makes it abundantly clear that to get anything out of music you have to be prepared for the long haul. Kaleidozyklen will have plenty of surprises in store for the patient listener long after Zorn's pretty but somewhat vapid recent compositions have yielded up their secrets."
Dan Warburton SIGNAL TO NOISE

"There are few musicians with ambition equal to that of Simon Fell. His determination to externalise sounds that crowd his mind's ear has resulted in some exhilarating, challenging, and at times creatively perverse recordings. In earlier pieces, notably Compilation III, Fell has engineered spectacular superimpositions and momentous collisions of disparate soundworlds. He loves the sonorities of post-Webernian serialism, unapologetic dissonance and unyielding mass that veers between extremes of register. And he loves the unpredictable, teetering on the brink energies of free improvisation. These two musical realms interknit in Kaleidozyklen, subtitled Composition No 57 for improvising double bassist, clarinet, piano & orchestra. In his sleevenotes Fell explains that he was after something like the 'messy heterophony' of Charles Mingus, Sun Ra and Gil Evans. He also pushes the piece's frame of reference back through Varèse, Ives and Stravinsky to Mahler, whose Fifth Symphony's Adagietto is weirdly present in the fourth movement of KaIeidozykIen. Fell himself takes the solo improvising role throughout, pitching his bass tirelessly and sometimes ferociously against the bristling ranks of the LSTwo Ensemble, a contemporary music group from the University of Leeds conducted by Simon Baines, with five assistant conductors to support him through the music's most complex and demanding passages."
Julian Cowley THE WIRE

"His integration of improvisation with 'classical' composition on such releases as Kaleidozyklen, Thirteen Rectangles, and Composition No. 30 are probably unmatched both for audacity and thoughtfulness (and that’s no mean feat). In his works, you’ll find blues, Boulez, Ellingtonia, Stockhausen, Taylor, and noise - not just slapped together, but organically merged."
Walter Horn BAGATELLEN

"Simon Fell never allows paltry matters like logistics to curtail his composerly aims. Case in point, the massive orchestra assembled to realize this hour plus ingot of music. Far from monolithic in terms of intent or content, his Composition No. 57 mirrors the topography of a city in its complexity and diversity. The charts are so labyrinthine that Fell enlists the aid of a conductor and five assistants to officiate all the action. Bass, clarinet, and piano are the principal improvising participants, but other instruments regularly rise above the masses, no small feat considering the colossal instrumental sections brought to bear on his score. Classical composers including Mahler, Stravinsky, Strauss, and Messiaen are also named as audible referents in the architectures, but the name that kept creeping into my consciousness was Bob Graettinger. Fell divides the piece into five movements, each using a serial system based on a pre-determined portion of the eighty-eight pitches corresponding to the keys of a piano. Each segment is designed to explore an overarching structural idea. Duration and Timbre deal in pitch extremes. Both pieces pit groups of lower register instruments against higher to create a frequently disquieting layering of sound that, despite its methodical design, feels oddly organic in delivery. Frequency is the most dynamic of the segments, involving the supportive conducting staff and the introduction of seemingly extraneous and disruptive elements to continually galvanize the orchestra. (In)articulation injects a bit of intentional entropy by feeding a Mahler score [Adagietto, Symphony No. 5] through music-reading software calibrated to the minimum accuracy setting. As played by the orchestra, the pockets of deliberately garbled information inject a thrilling sense of uncertainty with trap doors opening in unexpected places. Everything culminates with the cacophonous Intensity where Fell and his congregation has some fun with skyscraper sized slabs of dissonance and another pithy classical quotation, this time with Pauline Trusselle's contrabassoon as spokesperson. Projects of this size and scope have a tendency of buckling under the weight of their ambitions. Not so in Fell's case and he makes what would otherwise seem an unwieldy and unruly beast sing from start to finish."
Derek Taylor CADENCE

to see full press quotes/reviews for this album, visit www.brucesfingers.co.uk/catalogue/bf46reviews.htm